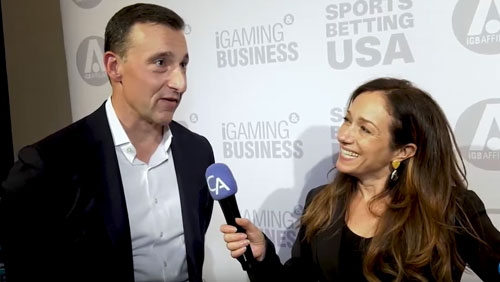 There are plenty of great betting opportunities in hockey, but because the game flows more than other North American sports, you really have to look for them. As data and technology catch up to the pace of the game, the potential betting action is becoming clear, and the National Hockey League’s (NHL) SVP for Business Development & Global Partnerships, David Lehanski, joined our Becky Liggero Fontana to discuss what the league has to offer.

A big difference the NHL has been able to tout for a few years now is the first professional sports team in Las Vegas. “We’re certainly seeing more volume from an NHL standpoint,” Lehanski said. “Betting on hockey has increased somewhat significantly. We saw an incredible increase last year, I should say two season ago, when the Golden Knights made their run, the incredible run in their inaugural season to the Stanley Cup Final. The numbers in Las Vegas were more than doubling for betting on hockey on the NHL, and more specifically for the Golden Knights. So you know, it’s still early, but we’re seeing incredible results and we couldn’t be more supportive.”

With three sports betting partners already signed on, the Liggero Fontana asked what Lehanski hopes to see from them. “So first and foremost, we want to create better experiences for betting on hockey, right? And so there are several opportunities out there now, there are a lot of applications out there right now, they may not all be geared for casual fans or people who are just getting introduced to betting,” he said. “And betting on hockey is kind of interesting, right? Sport that moves really fast, and there’s some limitations there, so you want partners who are embracing that opportunity to work with us to develop new experiences and our role really over the last few years has been focused on data and infrastructure. So if we can put the infrastructure and data in place that would allow then to create these new experiences, so data that would allow them to create new bet types on things like speed and location.”

One of the big emphasis for the NHL and its partners has been content integration, and the league has benefited from having very enthusiastic collaborators. “We sort of alluded to this puck and player tracking system that we’ve been building to capture all these data points, and we’ve been building that in concert with our media partners, because we wanted to make sure everyone was aware what data would be available as soon as it was available, and what types of storylines and messaging we would want to integrate into our live broadcast that could tie into betting, free-to-play, fantasty, whatever it might be,” he said. “So NBC in the United States, Rogers in Canada, have been intimately involved with this cool initiative to quite a big degree. So we’re working now on what that might look like in the near future, you may see some things later on in the season. But thankfully for us we have very progressive media partners whoa re embracing this whole opportunity.”