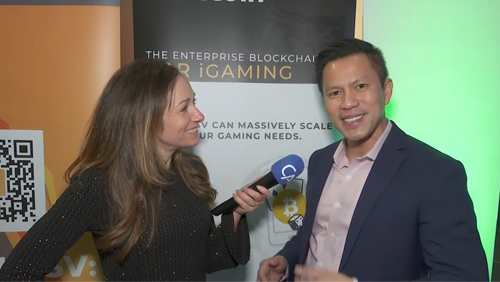 ICE London might be over, but the golden opportunities for transforming your iGaming business are just beginning. Coming up next week in London, February 20th and 21st, the next CoinGeek Conference will take place at Old Billingsgate and we at CalvinAyre.com would like to urge our readers to attend.

There is so much confusion and even skepticism surrounding the blockchain space and what it has to offer the iGaming industry, but the Bitcoin SV (BSV) camp has a crystal clear vision.

“We have to re-educate the whole world, but particularly the iGaming industry, about the misconceptions of crypto currency that has happened over the past year”, Jimmy Nguyen, President of the Bitcoin Association, told CalvinAyre.com at the CoinPoint party during ICE last week.

“The iGaming industry and Bitcoin are a win-win together but only Bitcoin can massively scale with its original protocol, its original power, which is only possible with Bitcoin SV, so Bitcoin SV and iGaming are win-win”, he said.

Motioning to the Bitcoin SV banner on display at the party, Nguyen pointed out how BSV transactions are fast, super cheap, secure and with no charge-backs, a perfect solution for iGaming industry operators who are constantly accepting player deposits and making payouts.

He then went on to explain how BSV does far more than just payments and the BSV blockchain has inherent technical power that people just don’t realize.

“It’s more powerful than Ethereum, its more powerful than EOS. So all of those blockchain applications iGaming operators want, to create decentralized gaming where there is more efficiency without the need so much for a house or a sportsbook in the middle”, Nguyen explained.

“The ability to do tokens, the ability to create smart contracts, provably fair gaming, auditability, verifiability to please regulators- all of that is possible only on the Bitcoin SV blockchain. It’s the fastest, biggest scaled, most honest public ledger”, he said.

According to Nguyen, the Bitcoin ledger was always meant to be open, transparent and lawful, to the point where the Bitcoin whitepaper uses the word “honest” fifteen times.

“Bitcoin SV’s ecosystem is building not just powerful technology but an honest system that it better for everyone- players, operators, affiliates- who want honest payouts. That is possible – but not just possible – most advocated by us on Bitcoin SV as compared to the other cryptocurrency camps who are working towards dark coins, privacy coins, things that don’t provide the honesty, transparency, that we advocate for in Bitcoin SV”, Nguyen explained.

To understand how BSV can transform your iGaming business and the digital world as we know it, Nguyen encouraged CalvinAyre.com readers to join him next week at CoinGeek Conference London.

“Calvin Ayre himself will be at CoinGeek London. Calvin Ayre as you know clearly made his name as an online gaming entrepreneur and tycoon. He’s become a huge backer financially as well as philosophically at Bitcoin SV, the original Bitcoin protocol”, Nguyen said.

“CoinGeek Conferences are an event series for his CoinGeek brand which includes Bitcoin mining, venture investment, media, events and it’s the biggest gathering of Bitcoin SV professionals around the world”, he said.

“Our CoinGeek London Conference is our biggest, flagship event…its designed to educate media, technology, business executives about the power of Bitcoin’s original protocol unleashed in the Bitcoin SV blockchain and all of the amazing things you can do with it- micropayments, micro transactions, enterprise applications on blockchain”, Nguyen added.

The two-day conference features a packed schedule of informative panels and presentations from the brightest minds in the Bitcoin SV space and beyond, followed by cocktail receptions each evening and an infamous CoinGeek After-Party on the 21st.

“We have amazing speakers including Craig Wright, the creator of Bitcoin himself, Satoshi Nakamoto who is chief scientist of nChain, my colleague as well as Calvin’s, in this Bitcoin SV movement”, Nguyen revealed.

“Other keynote speakers, Tom Lee, a renowned Wall Street analyst who is very well known for his investment predictions. George Gilder, famed economist and best-selling author of the famed books ‘Life After Google’ and ‘The Scandal of Money’, talking about how data can have value”, he shared.

“It all advances this theme of creating a more honest internet. A more honest set of online activity, including with iGaming, only on Bitcoin SV. In fact, one of the speakers is going to be talking about their creation of a product for the gaming world that uses the Bitcoin SV blockchain. So, so much the gaming world would like to see and learn about”, Nguyen added.

For more information and to book your tickets, visit CoinGeekConference.com. We hope to see you there!