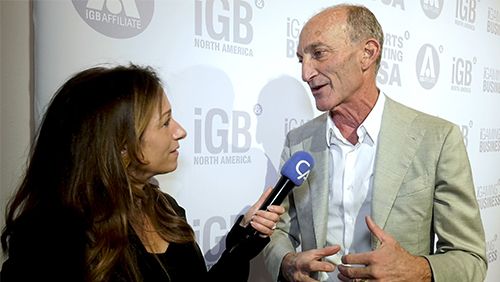 TheScore stands out as a unique story in the gambling space. As so many operators start to compete in the U.S. space, theScore comes from a media background, but with plenty of name recognition. To understand the company’s path, our Becky Liggero Fontana spoke with John Levy, CEO of theScore.

TheScore came to the gambling industry gradually, and from learning its own lessons in its previous expertise. “Our origins were a TV network in Canada and then through that we developed this digital world of the mobile app and we’re like the second most popular app in North America, ESPN is number one, were number two,” Levy began. “And we’ve always known that a high percentage of all the people who engage with us bet on sports. So it seemed unfulfilling for us just to become the super affiliate we looked at the market we said look the best thing to do is just go all-in. And we said, are we licensable? Absolutely because we kept ourselves perfectly clean for the last twenty years, hoping and praying that sports betting was gonna open up. Had to cut some deal, so we got a deal with Bet.Works, that allowed us to do the backend technology. Then we met Dennis Drazen from Monmouth Park, and that got us our license in New Jersey. And boom, five weeks ago we launched in New Jersey, we’re literally the only sports media company that’s actually the operator. We’re the bookie, and we’re having a lot of fun, and we’re learning like crazy. It’s amazing.”

While theScore is building up its gambling cred in New Jersey, they already have plans to expand further, starting with a deal with Penn National.”We’ve always said the New Jersey was just our entrance point, right?” he asked. “And our users, 65% of all of our users on our app come from the States. You know, we have 4 to 5 million average monthly users, they hit our app 100 plus times a month. This is always about doing a national footprint, but we have to do it on a state-by-state basis which is fine with us. So our options were one of two things: either we go state by state, or we find a bigger company, a gaming company, that actually kind of thought like us, and thinks like us, and they’re not many of them around. Like there’s a lot of the big guys, the MGM’s. They’re kind of stuck in legacy land and they got a lot of other interests to protect, huge revenue streams.”

Deals that theScore has pursued have now set up for to potentially do business in 11 states, and they certainly plan to grow more. But Liggero Fontana asked how other media companies could recreate this success. “You know it’s really, it’s hard,” Levy responde. “I mean I can only speak for us, because of the type of media company we were and we were never your traditional media company. Our TV network was never the traditional button-down shirt and tie TV network. It was more guys just talking about sports. And you know when sports betting came up on our TV network in Canada, that was only in Canada, you know the other networks would be saying well you know if the spread was going over a 14 point spread they go ‘Well, that’s interesting.’ Meanwhile, our guys are pulling out their freaking hair because they probably lost $100 bet on it.”

Levy didn’t have any specific advice to give those more buttoned up media organizations, but his advice was to find the path to change anyway. “All I would say is I think the whole thing is really about to change, really about to change,” he declared. “We’re just at the tip of the iceberg now, and then yes we did something quite evolutionary by integrating sports betting into our media operations I mean it’s only part of parcel why people love sports, and that’s why how we deal with it. But I think what you’re gonna see in the next three to five years, as media companies are trying to figure out and understand how to make the broadcast of their sports events make sense, this whole thing is going to go upside down. You know the sports networks now that carry the games and doing stuff for the rest of the 12 or 18 hours a day that very few people are watching, the TV networks, I think there’s a real opportunity there to just rethink them.