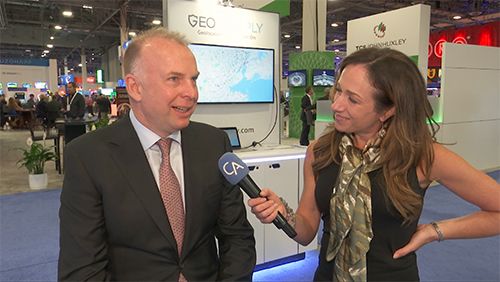 With every state in the U.S. getting to regulate gambling however they prefer, it can make for a messy situation for operators. Applying the correct rules, and denying the right customers, becomes key. GeoComply has solutions for that, and CEO David Briggs spoke with our Becky Liggero Fontana at G2E Vegas about it.

As the U.S. market has evolved, the solutions needed for it have had to change too. Liggero Fontana asked Briggs to expand on how things have changed. “It’s been quite a while, but I mean, we really created the company to solve a problem that we saw happening that it was unique to the U.S. market,” he said. “Compared to other jurisdictions, which is our federal or national, the U.S. has a gaming regulatory regime which is always at state level. So if digital was ever going to happen here, it would again be at the state level. That was the view that we took, anyway. And if you want to have gaming in a single state, you basically have to make sure that that gaming doesn’t happen in the neighboring states. And some of these states have cities that naturally flow across state lines.”

GeoComply saw the need to solve this, because existing methods of determining a player’s location just weren’t good enough. “The penalty for taking somebody from the wrong side of the state line is up to five years in jail, not just for the operator but also for the payment method used by the player,” he emphasized. “So those are pretty serious penalties, so the geofencing system would have to have been really, really strong, and yet a really good user experience. And that was our vision.”

As online, digital gaming has flourished, many U.S. land based operators have fought it tooth and nail. “I think some people that are wedded to the notion of cannibalization will never give up on that notion,” Briggs noted. “It seems incredible to me. I’ve been in the industry for 20 years, and I have never seen the impact of cannibalization that matches any of the hysteria that I’ve heard discussed particularly in the U.S. market. I mean, I remember in the poker world, poker rooms were dying all over the world, and then online poker came along and it rejuvenated them because it introduced a whole new generation of people that would play online, they’ve qualified, and they go to the World Series of Poker. And the World Series of Poker became bigger and bigger and bigger.”

Briggs laments that attitudes have yet to change, but he insists they will have to eventually. “Despite that the enormous evidence to show that online could really drive growth in land-based, I still hear from knowledgeable people that they think something like poker, land-based poker is being cannibalized by online, and that land-based sports book is being cannibalized by online,” he said. “There is just no data to support that, but some people have just never given up on that notion.”

GeoComply put a huge emphasis on using G2E Vegas to raise money for charity, and Briggs said it was only the right thing to do. “The first is, we wanted to raise money for the National Council on Problem Gambling very publicly at G2E, and from the gaming community, because this is a huge vent,” he said. “There’s so much money being spent on marketing gambling, but there is a social cost to gambling as well; there’s no point pretending that there isn’t. So as an industry, it’s very important that we put something back, and that should, I think, be a part of this show. It’s not just about spending money on big booths and having people come and doing deals, it’s also about demonstrating that we as an industry can use this gathering to raise money and put things back into the community.”

He added that it’s not just about raising money either, and noted two companies who are stepping up to do more. “Speaking more broadly, we’re quite pragmatic about the fact that digital gaming means everything is reported and is there to be used as a way to help problem gamblers,” he said. “And two companies that we ran the event with on Sunday are both using innovative technologies to help with responsible gaming, to help someone, if you exclude from one state, to be able to exclude from all the operators in that state and all the operators in other states at the same time. So that’s the effort that’s coming in from GameSecure which is slowly being ramped out into all the other states. There’s a new company called Vikes which also is trying to use AI to recognized dangerous betting patterns to inform the operators.”