Iowa might use a casino to pay for airport expansion 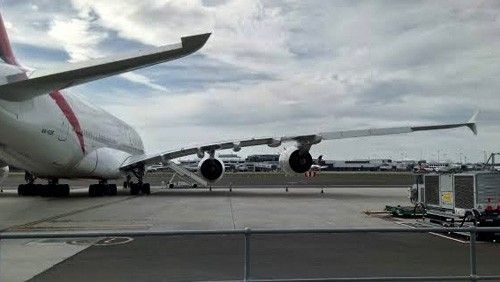 Des Moines International Airport in Iowa might become more than just a major flight hub. As traffic flowing through the airport continues to increase, the Des Moines Airport Authority (DMAA) needs to expand the property to alleviate the congestion, but it hasn’t been able to determine who would finance a new terminal. Possibly from seeing the popularity and interest given to the gambling industry lately, the DMAA has been presented with a novel solution. A casino resort at the airport could help cover the costs of the expansion.

According to the Des Moines Register, the airport anticipates spending $500 million for the new terminal, an expansion that would considerably help the city economically, but needs another $194 million to reach the goal. This led Highview Development Group (HDG), an entity that includes Wild Rose Entertainment, to present a plan to the DMAA for a $225-million casino and hotel at the airport. If it were built, the resort is expected to bring in as much as $85 million a year, according to HDG head Reggie Sinha.

The inclusion of Wild Rose is significant because it already operates three gambling facilities in the state, and this isn’t the first time that someone has tried to get the company to partner on a casino. However, it would appear that Sinha might be closer to finding success where others have failed. A statement from Wild Rose explains, “It should be noted that Wild Rose is not the first nor the only casino organization approached by Mr. Sinah [sic] and his Highview consortium. The company supports and is part of his efforts to put forth a creative solution to generate a long-term, continuous funding stream for the airport’s much-needed improvements.”

Iowa has several gambling facilities already – 23, to be exact. 17 are commercial casinos, two are racinos and four are tribal properties. However, Des Moines only has one of these, Prairie Meadows Racetrack and Casino, which is located in nearby Altoona, about 20 minutes away.

HDG has already presented its proposal to the DMAA, meeting with its board this past Tuesday. The venue would include a 350-room hotel linked to the airport via a skywalk, a restaurant, a rock garden and facilities for weddings, banquets and conferences. The topic didn’t get enough facetime, however, and will be entertained again when the board meets tomorrow.

Even if the DMAA is convinced that the project has merit, it won’t make the final decision. Gambling licenses in Iowa are issued by the Iowa Racing and Gaming Commission, which hasn’t been warm to the idea of new gambling houses in the state in recent years. It shot down proposals in 2014 and 2017 for a new casino in Cedar Rapids, arguing that the market was already saturated, but a casino in Des Moines, having just one, might find a better response.

It might, but there is no guarantee that it will provide the revenue HDG thinks it will. Physical casinos in the U.S. are becoming less popular as the younger generations tend to use smartphones and tablets more, and this could be detrimental to a new gambling facility. Tom Coates, who runs the Consumer Credit of Des Moines counseling agency, acknowledges this in a statement, explaining, “Brick-and-mortar casinos are on their way out. Older people may want to sit at slot machines all day, but younger people want to gamble from their phones. The casino is not going to be the draw they think it is long term.”