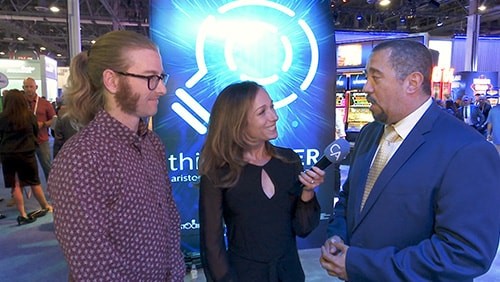 Aristocrat’s latest innovation, the Arc Canopy, was a huge hit at G2E Vegas, attracting visitors like moths to a flame. To learn more about how the idea came together, our Becky Liggero Fontana spoke with two of the fathers behind the creation, Mechanical Engineering Lead Frank Rodriguez and Senior Electrical Engineer Stephen Shaffer.

Rodriguez began by telling us the story of how all the parts came together. “I was working with Stephen here, he called me in one day and said ‘Look, I got this great idea, we drew it up for the thinkBIGGER program,’ and it was a round shape, and he said ‘But it’s missing something, I can’t get it across, I need some mechanical help.’” He said. “He’s electrical, I’m mechanical, so I was like ‘Yeah sure, I’ll try it.’ So I went and put in CAD (computer-aided design) and I showed it to him and he goes ‘That’s it, it’ll fit, it’ll fit in the space and everything in the floor. So there we took it off running, we said let’s just go for it.”

But other than being a beautiful arc of games, what is the vision for what the canopy can offer? “Well with Hyper Arc, my main goal was I wanted a multiplayer system with community gaming, so more people would get enjoyment with playing the game together,” Shaffer said. “And in the end, I really wanted to get a game space above us, because that was unutilized space on the casino floor, it allows us to try all new things that we’ve never done before.”

The Arc Canopy was a huge draw on the G2E Vegas floor, and visitors had plenty of questions. “So far, I get like, the first was like ‘Wow,’ and then of course, ‘How much does this cost.’” Rodriguez shared. “Well, we built one and that’s not too expensive. And it is ‘Wow, do you play between each other?’ I go ‘Yeah, you can play,’ and the questions keep coming. And ‘How do you play it?’ And I said ‘Mash a button, go for it, enjoy it.’ So basically, we just provided a canvas, we want game development to make games that shoot across, or like a pirate game and they shoot cannon balls at each other, or we flick coins at each other. We just, again, provide the canvas, knock yourself out, create the game. That’s basically it.”

But Liggero Fontana wanted to know if this new design had any drawbacks laying underneath it’s arc. “So we designed this one to be the same floor space as before, the only difference is we have game going above your head now,” Shaffer said. “So this is not different, it’s basically using the exact same stuff, but now we have competition for the ceiling.”