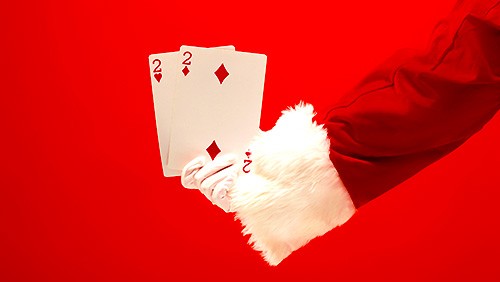 In many cultures, gambling is part of the social fabric that brings people together. That may never be more true than around Christmas time, when parents and children, aunts and uncles, grandparents and close friends come together to celebrate the spirit of Santa Claus and have some fun.

That was certainly true in our Italian-Canadian family. Gambling was interwoven with most of our family activities, and it made for great times and lasting memories.

The tradition for most years was exactly the same. We’d pile into the family car and drive to my Aunt’s house. There, the entire family would be gathered, with the adults gossiping over coffee while the children played video games or whatever the toy of the year was.

We’d exchange gifts around dinner time, and that’s when the gambling would first come into focus. A standard gift for many of the adults were a combination of lottery tickets and scratch tickets. They were the perfect gift for a family that wanted to share a moment of joy, but didn’t talk enough to know exactly what each other would cherish in the moment. And you had to give them as a combination. Scratch tickets were too low stakes to elicit the dreams of a lottery ticket, and lottery tickets didn’t give the instant satisfaction of a small win.

Although the laws were clear that children shouldn’t be obtaining any of these gifts, many of the adults would pass the scratch tickets on to their kids. It was understood the parents would keep any winnings, and it was a great way to shut up the little ones for a few minutes.

Time to eat, everyone!

The next big gamble was where to sit at the dinner table, for whoever got the meat stuffing place in front of them was going to be the big winner. You see, in our family, there was no protection of politeness at the dinner table. You got as much food as you could scramble to scrape onto your plate, at my aunt’s meat stuffing was the biggest prize. In some years, the intervention of a regulator may have been necessary, as a cousin may have cut off the best food at the pass, pissing off everybody else.

But the main event would always be a game of Rummoli. If you’re unfamiliar with it, Rummoli was a Canadian created card game that was basically a mix between poker and rummy. Most years we’d play for $0.05 a pot, but there were 8 pots for every hand. Each pot would be won by playing a specific card or hand, and some pots would build up to be worth quite a lot after a few hours of playing.

The whole family would play for hours. Anytime someone ran short nickels, there would be a frenzy to try and find more to keep playing. If someone won a big pot, most of the family would curse them out. It was always a competitive game – nobody wanted to lose and there was some money to be made – but it was a fun time too.

It was from those games of Rummoli that I first learned how to play poker. The best poker hand of every hand won a pot, so understanding which of your cards could win that pot was essential. It was also how the game ended. Our grandfather, usually around 9 or 10 pm, would suddenly declare the game over and deal everyone a five card hand. Whoever had the best poker hand would win all that was left in the pots.

Altogether, our family’s Christmas gambling habits were all pretty low stakes, and to be honest, they were distractions to keep people from annoying each other in more dramatic ways. But learning to gamble at home with family helped to develop it as a healthy entertainment habit in our family. And it created memories we’ll never forget.