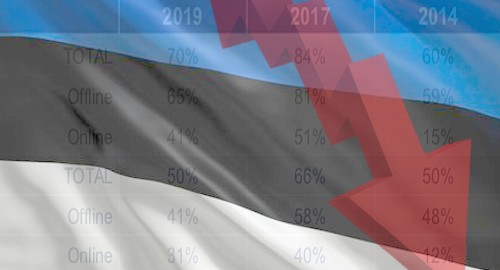 Estonia’s gambling participation rate has fallen hard over the past two years even as its number of problem gamblers has stayed mostly constant.

A new study by Estonia’s Ministry of Finance queried nearly 3,000 residents aged 15-74 years on their gambling activity over the past two years. The Contacts of the Estonian Residents with Gambling study found sharply declining participation in nearly all forms of gambling, both offline and online.

Lotteries remained the most popular form of gambling, both online and offline. Online lottery participation over the past two years fell 14 points to 25%, while sports betting slipped one point to 5%. ‘Other games’ rose two points to 5%, online casino games gained one point to 4% and online poker fell one point to 3%.

Offline gambling activity suffered roughly similar declines, although lottery participation fell a whopping 20 points from 2017 to 36%. The only real offline gainer was the ‘other games’ category, which doubled to 8%.

The study pegged 13% of respondents as belonging to a gambling addiction risk group, i.e. actual problem gamblers and those who might develop problem gambling tendencies. The figure is up only one point from 2017 but the number of gamblers fitting this description in the 15-19 age demo shot up nine points to 28%, while those in the 20-29 demo fell four points to 15%.

The most popular reason for gambling was to win big bucks, which was cited by 46% of all gamblers. Entertainment value was second with 43%, while 16% hoped gambling would solve their financial woes. Among problem gamblers, financial woes and learning of someone else’s windfall were the primary motivations.