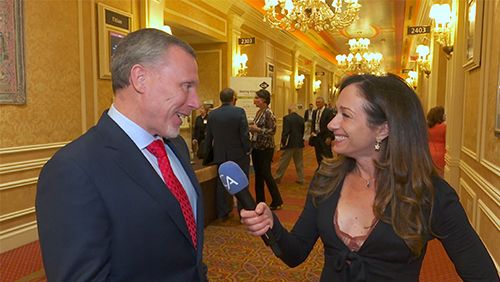 Earle Hall, CEO of AXES.ai and chair of the GSA Blockchain group, splits his time researching and working on the bleeding edge of technology and preaching about its use cases. He recently joined Becky Liggero Fontana at G2E Asia to share his thoughts on blockchain, artificial intelligence and facial recognition technology, and what he sees coming in the future with each of them.

Fontana began by asking what got him to go on the road talking about blockchain. “Because I was scared to death,” he answered simply. “With my team, we built a cloud company that picks up information in about fifty countries. Quantum computers are real, we were really, really worried about hacking and all these types of things. So what we did was we started to migrate towards a Microsoft blockchain solution to create more security, less chances of being hacked, and especially to be able to integrate all the new tools that are coming out.”

Where blockchain becomes a game changer is in helping regulators share information across their jurisdictions. “Because in the United States, you have a whole bunch of jurisdictions, there’s 30 or 40 of them.” Hall noted. “All over Europe there’s jurisdictions. And there all trying to do the same thing individually. Now here’s what blockchain does: if one jurisdiction, a majeure jurisdiction had a very good blockchain that had a responsibility gaming policy sitting inside of it, they would be able to share their information with the next jurisdiction and actually adhere to any rules, like in Europe there’s the GDRP privacy rules. So by sharing information, you can protect people, but at the same time detect if there’s problem gaming.”

Blockchain isn’t the only technology Hall likes to speak about though. Artificial Intelligence (AI) will also have a huge role to play in helping fight problem gaming. “First of all, one thing I’ve said for the last three years consecutively is I don’t believe in AI without blockchain,” he stressed. “When you do science, whether it be physics, chemistry, biology, you’re always looking to make sure that you don’t contaminate your sample, because if you contaminate it, you’re never going to get the right result. So blockchain gives you the environment, the setting, to have what I call true data.”

Hall concluded by noting this is where his current focus is: identifying the animalistic responses that can indicate a problem brewing. “That’s what were up to, trying to figure out way before someone is a problem gambler that they’re starting to show the signs of freeze and distress that will bring them to eventually problem gambling.”