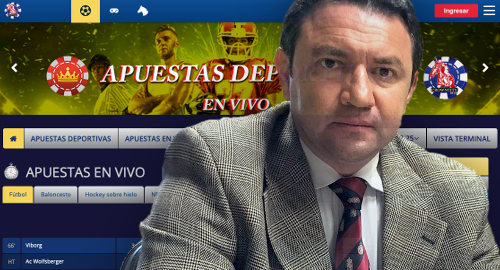 Paraguay’s online gambling monopoly is kicking back less than $4m to the government on an annual basis, a situation the gambling regulator blames on unauthorized competition.

This week, José Ortiz, head of Paraguay’s National Gambling Commission (Conajazar), revealed that the Aposta.la online sports betting monopoly was contributing about G2.1b (US$325k) per month to the state treasury, which works out to around $3.9m on an annual basis.

Paraguay has a population of only around 7m residents, but Ortiz (pictured) justified the government’s paltry online betting returns from Aposta.la on the activities of at least three unauthorized online gambling operators. Ortiz singled out one of these companies as Crown City, which operates the Apuestasjockey.com domain (pictured behind Ortiz).

Crown City’s parent firm, Montego Trading, operated under a Conajazar permit until last year, when Aposta.la’s parent Daruma Sam S.A. was awarded a five-year betting monopoly despite suggestions that the government and Ortiz’s predecessor at Conajazar had rigged the tender to ensure Daruma Sam won the prize.

This week, Ortiz bemoaned the regulator’s lack of official powers to “combat” unauthorized online competition and urged parliament to pass legislation “that adapts, updates and modernizes a law that is already quite obsolete.”

Trovato’s dual role represented an apparent violation of FIFA rules that prohibit members from having “any interests, either directly or indirectly” in betting operations. The APF’s other clubs have demanded that Aposta.la stop taking wagers on their matches.

This week, Trovato accused the APF of seeking to control betting for themselves, citing a 2017 document in which the league sought to be named the sole body with the right to the “economic exploitation” of football wagering. The APF rejected Trovato’s claims, saying it was only seeking to “defend the commercial, economic and intellectual property rights” of its members.