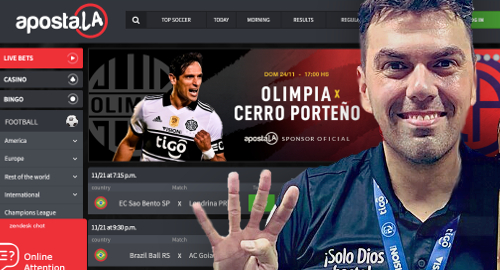 Paraguay’s football governing body is demanding a halt to betting on its matches following the revelation that one of its team owners is deeply connected with local sports betting operator Aposta.la.

This week, the executive council of the Asociación Paraguaya de Fútbol (APF) voted to prohibit the use of its trademarks and brands by the Aposta.la sports betting monopoly and the APF is prepared to go to court to enforce ownership of what it views as its intellectual property.

Local media quoted Juan Alberto Acosta, president of the first division Guaraní team, saying the APF wanted to ensure that “betting on our football does not happen anymore,” and the APF would take legal action if the local bookmaker didn’t comply with this ‘request.’

Aposta.la is operated by Daruma Sam S.A., which last year was controversially awarded a five-year betting monopoly, despite protests by other local bookmakers that the government and gambling regulator had rigged the tender in Daruma Sam’s favor.

The APF is a member of football’s international governing body FIFA, and FIFA’s code of conduct specifically prohibits its members having “any interests, either directly or indirectly … in entities, companies, organizations, etc. that promote, broker, arrange or conduct betting, gambling, lotteries or similar events or transactions connected with football matches and competitions.”

Given Trovato’s connection to Aposta.la, the presidents of 10 of the 12 clubs in the APF’s top division signed a letter calling for an investigation into all major tournaments over the past two years “to identify behaviors that could be linked to possible infractions.”

So far, Trovato’s response has been to post cryptic Bible quotes via his personal Twitter account, while also taking a dig at his fellow APF club owners, suggesting they’re the ones that should be probed for possible match-fixing given the way Olimpia has run roughshod over them during the past couple seasons.