Kane and company run riot against Montenegro and Kosovo, scoring 11 unanswered goals, while Northern Ireland must face play-offs and Wales put themselves in pole position 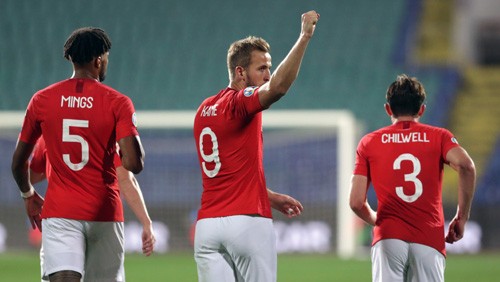 England qualified for the Euro 2020 Finals in fine style over the weekend as successive thrashings of Montenegro and Kosovo saw Gareth Southgate’s men top Group A and qualify for the finals as one of the top seeds.

It was a week that had started with Raheem Sterling and Joe Gomez exchanging views over the canteen table – and possibly rolling on the floor in a wrestling match – about Liverpool’s win over Manchester City in the Premier League title summit. However, the seven days ended with England qualifying for the Euro 2020 finals with a genuine hope of the winning their first major silverware in over half a century.

At home against Montenegro, Sterling sat in the stands as his teammates handed out a football lesson against their inglorious visitors. The match finished 7-0, but in truth, could and perhaps should have been England’s record Wembley win in their 1,000th competitive game as a country.

Harry Kane grabbed a hat-trick, and in adding another against Kosovo has put himself sixth on England’s all-time list of goalscorers, with only 22 goals between now and the end of his international career needed to become England’s greatest ever at putting the ball into the back of the oppositions net.

England’s win against Montenegro meant that despite their 2-1 reverse in the Czech Republic, they would be going to the ball, qualifying for Euro 2020, with five of their possible 7 games being played a Wembley.

It’s not quite Euro ’96, but it might just be coming home after all.

With the Kosovo match effectively a dead rubber, England still sparkled in patches, with Gomez, who had appeared against Montenegro – to a smattering of boos, incredibly – sitting out the trip to Kosovo after a knock. Sterling – restored to the line-up – was one of England’s best players, assisting goals for both Kane and Rashford, the latter of which was the finish of a many in fearless form for club and country.

England qualified with merit, topping the group and winning all except one of their games. But this was a group including Bulgaria, Kosovo and Montenegro, three teams who wouldn’t strike too much fear into League One sides, let alone international teams like Southgate’s side.

Can England translate yet another comprehensive qualifying campaign into tangible glory in a major tournament for the first time in 54 years next summer? If they do, then no-one will ever forget where they were this weekend – checking the latest news on exactly what Gomez and Sterling said to each other, with England’s passage to the finals a mere formality.

Other home nations had mixed results on a weekend including a win for Wales and a nervy nail-biter for Northern Ireland. Only a Steven Davis missed penalty prevented Northern Ireland beating the Netherlands, but it will be the play-offs for Michael O’Neill’s men after a supreme effort to finish in the top two of a group containing both Germany and Holland fell just short.

Wales won 2-0 in Azerbaijan to set up a home game against Hungary on Tuesday night, with Croatia’s 3-1 victory over Slovakia in the same group meaning that Ryan Giggs’ men know that a win will take them through in second place. With Gareth Bale, Aaron Ramsey and Daniel James all fir to take on Hungary, a passionate Cardiff crowd will hope to sing their boys to the three points.