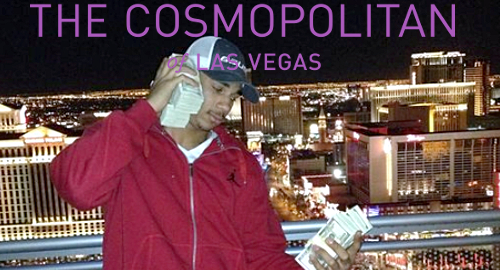 On Monday, the Cosmopolitan of Las Vegas casino filed a civil suit against San Jose Sharks forward Kane, seeking repayment of $500k in gambling markers the casino says it issued to Kane in April. The casino reportedly also wants Kane to pay around $15k in interest, legal fees and other costs.

The Las Vegas Review-Journal reported that the Cosmo issued Kane eight separate markers worth between $20k and $100k on or about April 15, around the time the Sharks were in Vegas to play the hometown Golden Knights franchise in a first-round playoff series.

Neither Kane nor the Sharks have yet to publicly comment on the lawsuit or the media reports. Kane, a Canadian citizen, signed a $49m deal with the Sharks last year, so it’s not like he can’t afford to honor the markers.

In 2012, back when Kane was playing for the Winnipeg Jets, a fan held up a sign that read “Dear Evander: Please stop walking out on your bills. Sincerely, Winnipeg servers and restauranteurs.” Local media looked into the allegations and couldn’t find evidence to support the fan’s claim.

That same year, Kane posted a photo to his Twitter account of him standing on a balcony in Las Vegas, holding bricks of cash to his ear like a phone. Kane’s tweet referred to boxer Floyd Mayweather, who was notorious for carrying around a backpack full of benjamins he used to wager at Vegas sportsbooks.

Kane is the second high-profile NHL figure to run into credit trouble at a US casino this year. In September, Ottawa Senators owner Eugene Melnyk was sued by the Mohegan Sun casino in Connecticut for failing to pay $900k in markers he’d run up in 2017. Melnyk’s attorneys later accused the casino of refusing to cash out their client’s chips while he was up big and ‘inducing’ Melnyk to continue playing until his luck changed.