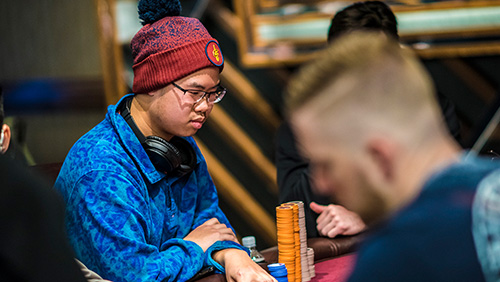 After a see-saw final table involving former WPT champions Anthony Zinno and Brian Altman, it was Nitis Udornpim who took the title and $319,415 as he triumphed at the Live! Casino in Maryland.

The $3,500-entry event saw 495 create a prize-pool of $1,584,000, and after four fantastic days of poker, it was Thailand-born Udornpim from Ohio and latterly Colorado who booked the win after triumphing against Stephen Deutsch heads-up.

With nine players remaining, Udornpim was seventh in chips, but rallied to eliminate the first three players who would bust. As the final table started, he was in pole position to make a deep run, and it was a huge coinflip that gave him the boost he needed just when required as he won with ace-king against Brian Altman’s pocket jacks.

Altman would actually outlast Anthony Zinno, who busted in fourth place when his pocket eights couldn’t survive a flip. Had Zinno held pocket sevens – his famous hand from a massive all-in on his way to winning the L.A. Poker Classic, he would have flopped a set, but it was not to be and he busted in fourth place for $111,415.

Altman lasted one place further after his coinflip win against Altman put him second in chips with three remaining. He was heads-up for the win when he won a huge cooler against the same opponent. Altman must have sensed a chance for revenge when he moved all-in holding pocket queens. But Udornpim looked down at pocket aces and after the community cards fell, he held to bust Altman.

Heads-up wasn’t a lengthy affair, and when Udornpim was all-in with ace-three against Deutsch’s king-nine, he called for destiny to see his hold. The flop of 2-4-5 gave him the wheel, and he rolled it on home to victory by the river to claim a memorable victory.

Udornpim, who had won a total of $345,445 in his five-year poker career before the event, took home $319,415 for winning the WPT Maryland Main Event alone, and he also has entry worth $15,000 into the season-ending WPT Tournament of Champions to look forward to, earning 1,000 points towards his Hublot Player of the Year leaderboard total to boot.

Stephen Deutsch took home $202,905 for his runner-up finish, but it was Udornpim’s day and has his name on the famous WPT Champions Cup.

*includes a seat into the season-ending WPT Tournament of Champions.