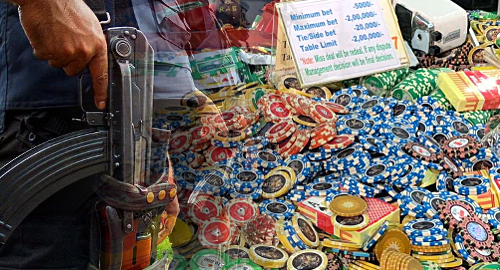 Bangladesh’s illegal casino crackdown is threatening to upend the nation’s political scene as some of the arrested individuals start ratting out their higher-ups.

Police in the Bangladesh capital of Dhaka staged more raids on illegal gambling operations this weekend, building on a series of raids that began last Wednesday. Those original raids on five sporting clubs resulted in the arrests of 182 individuals, including a leader of the Jubo League, the youth wing of the ruling Awami League party.

On Sunday, police shut down two other sporting clubs that were found to contain illegal gambling operations. The Daily Star quoted Lokman Hossain, director of the Mohammedan Sporting Club, saying he was “forced to give away the space due to political pressure,” although the BTK2m (US$23,700) per month the club earned in hosting fees didn’t hurt.

Hossain wouldn’t name the politicians who applied this pressure but said it shouldn’t be any great mystery to those who follow local politics. “Look at the newspapers and you will find the names.”

The Daily Star quoted other sources that said the longstanding involvement of political figures in illegal gambling was no great secret. Questions are also being raised as to how the casinos were able to operate so openly without any efforts by police to shut them down.

Dhaka South City Corporation Mayor Sayeed Khokon was quoted in local media saying he informed local authorities of the involvement of one of his councillors in the illegal gambling business two months ago “but I didn’t see any progress to this end.”

Jubo League Chairman Omar Faruk Chowdhury was less charitable in his view of police inaction, noting that some estimates put the number of illegal casinos in Dhaka at 60 and that four of the raided clubs were within 300 yards of a police station. “Law enforcement agencies, have you been sucking your thumbs for so long?”

On Sunday, Home Minister Asaduzzaman Khan Kamal told reporters that the casino crackdown “is being taken on the Prime Minister’s directives.” Kamal emphasized that the government had no intention of legalizing gambling and “politician, public representative or any established person in the society will not be allowed to run casino business.”

Many of the casino staff arrested in these raids are Nepalese nationals and the Dhaka Tribune quoted a police investigator who said the ringleader appears to be Ashish Shrestha, an assistant managing director at the Bally’s Casino in Kathmandu. The investigator said Shrestra “was involved in setting up the casino equipment and acted as a skilled hand for operation of the machines at Victoria Club.”

Other reports suggest that as many as 100 foreign nationals – including some allegedly linked to casinos in the Indian state of Goa – are overseeing gambling activities in Bangladesh. Kamal said the government would “talk to the respective embassies in taking necessary action.”