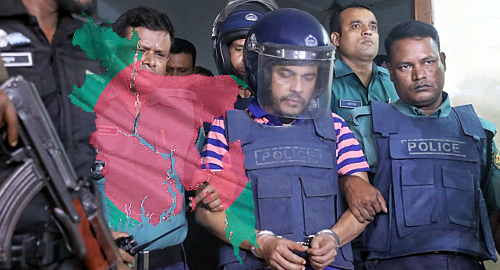 Authorities in Bangladesh have launched a major crackdown on illegal gambling and those caught up in the sweep include a leader of the youth wing of the country’s ruling political party.

On Wednesday, police in Bangladesh’s capital Dhaka raided five establishments suspected of harboring illegal casino operations. In the process, the Rapid Action Battalion arrested 182 individuals, including Khalid Mahmud Bhuiyan, a leader of the Jubo League, the youth wing of the Awami League party.

Gambling is strictly prohibited in Bangladesh, and police claimed to have been acting on intelligence of the underground casinos, some of which reportedly operated around the clock. The raid on the Youngmen’s Club, ostensibly a football club in Dhaka’s Fakirerpool district, resulted in some 142 arrests, of which 16 were staff members. Police said the majority of those charged with operating the gaming gear were from China and Nepal.

Police seized a variety of gambling paraphernalia, including blackjack tables and slot machines, as well as quantities of alcohol, illegal drugs, a few firearms and an undisclosed amount of cash.

The Daily Star quoted one of the arrested gamblers claiming that he’d lost BTK15m (US$177,500) at the Youngmen’s Club in the past six months. The police brought mobile courts with them on their raids, and 31 of those arrested have already been sentenced to a year in prison, while the others received six-month sentences.

The arrest of the Jubo League’s Khalid (pictured, in helmet and cuffs) has prompted a flurry of accusations, with some claiming that the police had permitted the casinos to operate with impunity, while others believe the raids were politically motivated to damage the Awami League’s standing.

Home Minister Asaduzzaman Khan Kamal rejected the idea that there was any ‘plot’ against the Jubo League or its leadership and warned that anyone found to be involved in illegal gambling – including police officials – will be prosecuted to the full extent of the law.

Leaders of the Bangladesh Nationalist Party (BNP), the country’s main political opposition, accused the government of turning Dhaka into a “gambling and sin city” like Las Vegas. Dr. Abdul Moyeen Khan claimed that “the ethics and morals of people are washing away” as the government pushes the country’s development programs.