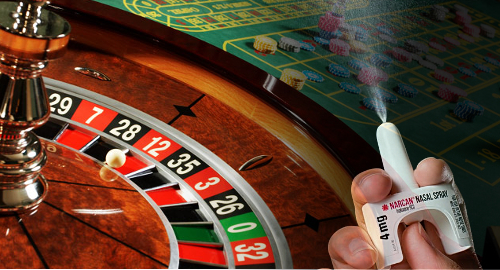 Problem gamblers may have a new chemical weapon in their fight against their uncontrollable urges, according to a new study by Finnish researchers.

A report published in the British Medical Journal (BMJ) involved researchers in Finland attempting to determine if Naloxone – the drug known commercially as Narcan that’s used around the globe to revive individuals who overdose on opiates such as Fentanyl – could decrease the urge to gamble among individuals for whom such restraint proves difficult.

The study, which was conducted way back in 2017, was admittedly small, involving only 20 problem gamblers who agreed to administer the Naloxone nasal spray for a period of eight weeks.

The participants were divided up into two groups: Group A took one 2mg hit of Naloxone at a time on an ‘as needed’ basis, up to a maximum of 8mg per day, while Group B took 4mg hits up to a daily maximum of 16mg. The small sample size meant there was no control group that received only a placebo in lieu of Naloxone.

The good news: 90% of the participants completed the study and no serious adverse events occurred. On 73% of the days in which the subjects used their meds, no gambling was reported. Gambling severity also decreased, and most (15) of the participants showed improved scores for depressive symptoms.

Group B showed a lower likelihood of gambling than Group A when the drug was administered. However, Group A reported increased gambling expenditure from pre-treatment to post-treatment despite a reduction in gambling frequency.

Group A also reported more adverse events (nausea, headache, loss of appetite) than Group B, despite their lower dosage, although none of these events were serious.

The study’s authors suggested that a longer treatment period and more psychosocial support and follow-up would be needed to determine if Naloxone could be a magic bullet for problem gambling. Plans are already underway for a new 12-week study that will involve more participants as well as a placebo group.