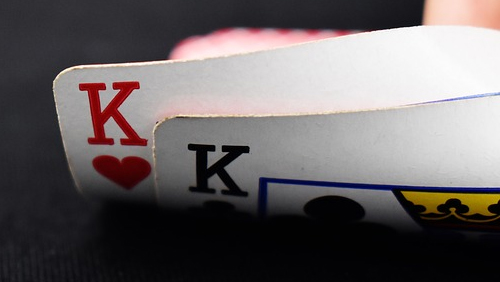 Ivan Deyra becomes the second Winamax sponsored pro to win a bracelet at the 50th Anniversary World Series of Poker, and Taylor Paur wins his second bracelet after conquering a $500 online bracelet event.

Some poker players can hold their post World Series of Poker (WSOP) bracelet winning parties in a photo booth without a ripple in the tiny curtain. Not so, Ivan Deyra, who took down Event #79: $3,000 No-Limit Hold’em, in front of a fervent French crowd in the Thunderdome.

David Gonzalez and Guillaume Nolet dominated the chip counts with five remaining. The short-stacked David Weinstein survived for 90-minutes before Deyra sent him to the rail A2>KQ.

In the past 18 months, Patrick Leonard has sacrificed time at the live tables to improve his online game, and his #3 position in the PocketFives World Rankings shows what an excellent idea that was. However, Leonard is still coconut yoghurt laced with maple syrup when it comes to his live game.

In March, Leonard won a No-Limit Hold’em Six-Max event at partypoker MILLIONS South America, and has followed that up with seven cashes at this year’s series including two final tables, as well as making the final table of a $10,000 Aria High Roller.

Leonard’s attempt to win a first WSOP bracelet ended in fourth place when with blinds at 80k/160k/160k, Leonard moved all-in for 1,140,000 from the big blind after Deyra had opened to 360,000 from the cutoff. Deyra made up the difference, and Leonard was delighted to see his KcJs dominate Ks9h, only for a second nine on the flop to send the French rail into a rapture, and the English rail into a stammer.

The elimination of the partypoker pro gave Deyra a massive chip lead, three-handed. Gonzalez doubled through Deyra, twice, before the Frenchman eliminated the French-Canadian, Guillaume Nolet, in third 77>66, to take an 8.7m v 4.7m chip lead into heads-up action.

No bombs dropped during heads-up play. Instead, it was a calm and controlled performance from Deyra who led from start to finish. The final hand saw Deyra limp from the small blind and Gonzalez check his option. The action checked through to the turn on a board of 8d4s4cKc, and Deyra called a 200,000 Gonzalez bet. The river card was the 3s, Gonzalez moved all-in holding 5d2d for a complete airball, and Deyra took the bracelet, calling with pocket kings for the boat.

The win propels Deyra over the $1m mark in live tournament earnings, merit that makes the cash game grinder proud.

“I’m really proud to cross the one million, and that was a goal for me, but the main goal was winning a bracelet,” Deyra told PokerNews after his win.

The win was his fifth cash of the summer, and his second final table after finishing eighth in the $1,000 No-Limit Hold’em Double-Stack event. Deyra also ran deep in the $10,300 MILLIONS Vegas finishing 22nd for $35,000 – all-in-all, a successful trip for the Frenchman.

Three other players born nameless only to become stars of a strange little niche were Michael Tureniec (12th), Will Givens (14th), and Justin Bonomo (22nd).