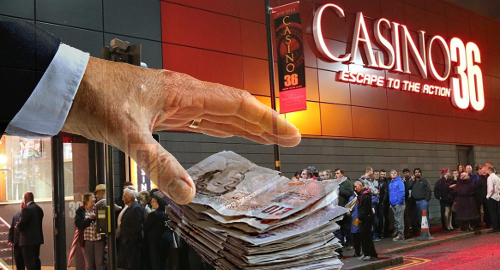 A U.K. land-based casino is £300k poorer after being taken to the woodshed by the nation’s gambling regulator.

On Thursday, the U.K. Gambling Commission (UKGC) announced it had imposed a £300k settlement package on Casino 36 in Wolverhampton casino for coming up short in its anti-money laundering and social responsibility obligations.

The UKGC’s probe found that Casino 36 allowed 33 customers to gamble “significant sums of money” without the venue performing adequate customer Enhanced Due Diligence (EDD), Source of Funds and Source of Wealth checks.

The failures, which occurred between November 2017 and October 2018, also included the venue’s failure to identify and interact with customers showing signs of problem gambling behavior.

Casino 36’s management acknowledged that certain policies at the time were ineffective and said it has since “evolved” those policies. Management also said there’d been “considerable learnings” from these cases and it was committed to raising its standards further, particularly in relation to safer gambling.

The £300k settlement is broken down as follows: a £152,259 payment in lieu of a financial penalty and divestment of the £147,741 it collected via the activities in question. In addition, Casino 36 will pay £18,648 to cover the UKGC’s investigation costs.

Casino 36 was also hit with new license requirements, including maintaining EDD on its top 250 customers (the top 125 by drop, and the top 125 by loss). The venue must also establish a regular training needs analysis of all staff, the findings of which must be presented to the UKGC on request.

Casino 36’s personal management license (PML) holders will also be required to undertake outsourced anti-money laundering training. Along with staff in key positions, the PML holders will take a refresher course within the next three months, plus annual top-ups thereafter.

UKGC exec director Richard Watson said it was “simply not acceptable” that “stolen money could have flowed unchecked” through Casino 36 due to management’s failings. Watson warned operators that they “have to understand their customer base,” something that can only be achieved if operators meet their regulatory obligations.