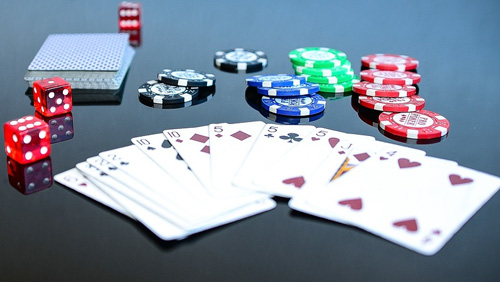 Susan Jeffers once wrote an excellent book called ‘Feel The Fear And do it Anyway,’ and I think David Lambard may have read it.

The 44-year-old has been playing live cash games in California professionally since he was 34, so he knows a wizard or too when he sees one, and after reaching the final table of Event #36: $3,000 No-Limit Hold’em Shootout, Lambard saw wands “everywhere.”

Unperturbed, and confident in his game, Lambard went on to conquer, including beating three former World Series of Poker (WSOP) bracelet winners, including the man who has won more money playing live tournaments than anyone, alive or dead.

“I just went with it; I just had a feel,” Lambard told PokerNews after his win. “I am kind of an instinct player, and these guys are pretty robotic and know the whole matrix. I came with my own style. The only way to win a tournament is to have no fear.”

Let’s get to those three former bracelet winners I mentioned.

The three-time bracelet winner and All-Time Money Leader, Justin Bonomo also made the final table despite leaving earliest of them all. It was Bonomo’s sixth final table of 2019, and his sixth ITM finish in a Shootout event with this his deepest run.

And then you had Martin Zamani who has never won a bracelet but came close after finishing fourth in the $600 Online Pot-Limit Omaha (PLO) event. Zamani also won a $25,000 at the PokerStars Caribbean Adventure (PCA) in January for $895,110.

All four of these wizards were capable of generating the type of turbulence that blows lesser men to the rail, but Lambard was like a rock, making it through to the heads-up stage where he defeated the Frenchman, Johan Guilbert, with an assured performance.

From a tournament that lasted three days to one that squeezed the action into less than 12-hours, and Upeshka De Silva took down the 1,224-entrant $600 Online No-Limit Hold’em Knockout Bounty event to capture his third bracelet.

The win sees De Silva overtake Daniel Zack at the top of the 2019 WSOP Player of the Year Leaderboard having cashed six times, including two final tables after finishing 3/754 in the $3,00 No-Limit Hold’em 6-Handed.