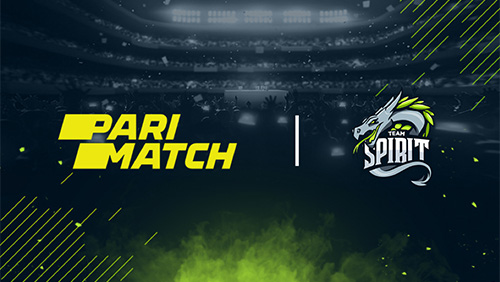 13 June 2019 – Parimatch, the international betting holding, and Team Spirit, one of the leading e-sports organisations in the CIS region, have announced the start of a six-month co-operation.

Under the agreement, Parimatch will support teams from across the organisation, including Dota2 and CS:GO. The collaboration means that the Parimatch logo will appear on the players’ uniform, and the bookmaker will also be featured across the social networks of Team Spirit. The agreement is valid from June to the end of 2019.

Stepan Shulga, Head of Esports, Parimatch: “Our company operates in the key markets in the CIS, so partnering with Team Spirit is a natural fit. The teams include well known players, and we do not doubt the success of the dragon squads in the regional and international arenas. We value a systematic approach, competence during negotiations and dedication to eSports. We have already received exceptional support from the organisation’s management, and look forward to a close and productive partnership.”

Nikita Chukalin, General Manager of Team Spirit: “Parimatch is undoubtedly the best bookmaker in the CIS market for eSports, and we are proud to work with them. When choosing a partner, we always pay special attention to the status of the company and its relationship with our audience. We are excited to partner with Parimatch and I am sure that we will have a long and fruitful co-operation. Cheer on Team Spirit with Parimatch!”

Parimatch is an international betting platform connecting emerging markets with the world of traditional and niche betting. Parimatch has over 1600 employees worldwide, supporting almost two million customers and covering more than 20 sports and 60 countries, 200 leagues and 600 sporting events every day. Headquartered in Cyprus, the brand has been established for over 25 years and now operates in different markets (Cyprus, Belarus, Kazakhstan). The company is the official betting and wagering partner for the UFC in EMEA and the brand has sponsorship agreements with sporting institutions including Ukraine’s national football team, FC Apoel (Cyprus), FC Shakhtar (Ukraine) and Virtus Pro (e-Sports). In February 2019, the brand officially unveiled a new ambassador – world-famous UFC fighter Conor McGregor.

Team Spirit is an e-sports organisation established in 2015. The CS:GO team has updated its roster and is considered one of the best teams in the CIS. The Silvername team player is a member of the Hearthstone World Championship and one of the most popular streamers in the Russian segment of Twitch.