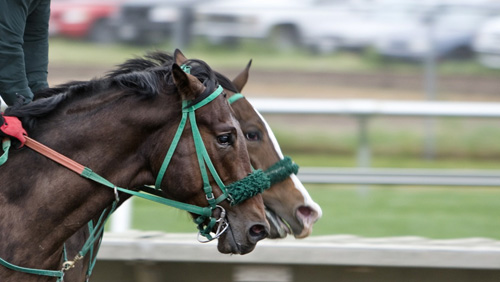 If there was a chance of the Santa Anita horserace track avoiding too much scrutiny over horse deaths before, those odds were just eliminated. Two more horses died this past weekend, bringing to a total 29 deaths in almost six months. The California Horse Racing Board (CHRB) has finally decided to step in and is trying to halt to all further activity.

Formal Dude went down in the stretch on the 10th race this past Saturday. A veterinarian was called in to assess the severity of the crash, and determined that the four-year-old gelding had suffered a pelvic injury. That injury required that the horse be put down. According to Casino.org, the CHRB then requested that Santa Anita call off the rest of the scheduled events, but refused.

Sunday, Truffalino, a three-year-old filly, wasn’t able to finish her race, slowing down on the track before collapsing and dying. Initial indications were that she had suffered a heart attack.

Despite the CRHB’s efforts, Santa Anita isn’t planning on calling off the rest of the season, which only has two more weekends remaining. However, track officials, along with the track’s parent company, the Stronach Group, and the Thoroughbred Owners of California and the California Thoroughbred Trainers, put their heads together to try and formulate a statement that would appease the masses. They said that, since racing started up again this past March, catastrophic injuries have been cut in half during races, and by over 84% during training.

They added, “A detailed and serious epidemiological investigation of all track accidents is underway and will continue with the greatest urgency. Track management, owners, trainers, and veterinarians are re-doubling their vigilance and close supervision of both training and racing protocols and will consider all enhancements to the sweeping new protocols already introduced. We have great respect for Governor Newsom and the CHRB, and we look forward to working closely with them as we continue to discuss these issues.”

The CRHB can order the track to stop its races, but red tape is going to get in the way. The order would require a vote, which would require a meeting. A meeting can only be called if a ten-day notice is given. That would mean a meeting could not be held until June 20, only three days before the end of the season.

There may not be much that can be done this season, but the CRHB might still force the track into suspension. It could also decide to relocate the Breeders Cup, which is scheduled to take place on the track this November 1-2.