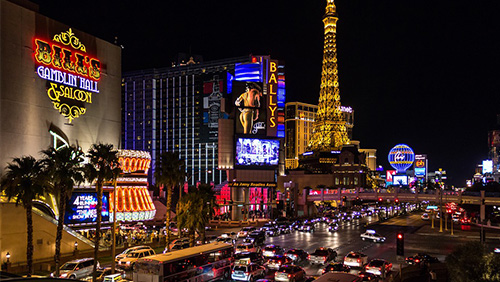 If you’re hoping that more liberal marijuana laws might mean you can light a joint inside at a Las Vegas blackjack table anytime soon, we’ve got bad news for you. A recent panel at the International Conference on Gambling & Risk Taking at Caesar’s Palace agreed that marijuana won’t be welcome for some time to come.

The Las Vegas Sun reports that due to federal laws still regulating marijuana as an illegal recreational drug, it won’t be seen in casinos. “The relationship with marijuana has been a concern for our gambling operators because the Gaming Control Board enforces a policy of strict regulation,” noted Jennifer Roberts, associated director for UNLV’s International Center for Gaming regulation. “That has impacted how we look at the cannabis industry in Nevada. There are some legal issues there.”

Nevada voted to make marijuana legal in 2017, meaning state law enforcement won’t throw you in jail if they catch you smoking the funny stuff where it’s allowed to be. But because the feds still don’t approve, regulators and casinos want to stay clear of it.

“Gambling operators (in Nevada) are licensed with the requirement that they have to comply with all state, federal and local laws,” Roberts added. “If they were to allow customers to come in and possess and use a controlled substance, that puts them at legal risk. That’s the mindset. I’m not saying it’s an accurate mindset, but that’s what we’re faced with in the gaming world.”

She went on to note that operators have to file reports if they suspect any of their customers are owners of marijuana businesses. She even noted that if money has the whiff of marry jane, that’s enough to compel a report.

There is a possibility that casinos could host cannabis conventions, but as Tony Alamo, Nevada Gaming Commission Chairman noted, they would have to be closely watched. He said, “You could, but are you assured that all federal, state and local municipality laws within the sidewalks of the gaming property will be upheld? At the end of the day, that’s a question for each licensee. That’s how we left it.”

This could quickly prove to be a problem for the casino gambling industry, as the cannabis world is moving ahead without them, getting permission to set up lounges in Las Vegas. “Cannabis, as an industry, is way out ahead of us,” Timothy Fong, co-director of the Gambling Studies Program at UCLA, said. “The barn door is open and the horse is two miles ahead. We’re all still in the barn. Actually, we’re not even in the barn yet.”