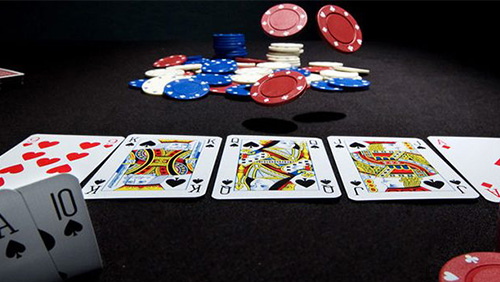 Online poker news from the PokerStars Spring Championship of Online Poker, the partypoker KO Series, and the GG Series.

Baklava is a Middle Eastern sweet made from filo pastry, nuts and honey. Sweet-toothed people who don’t eat cane sugar love it. It’s not to be confused with a balaclava, which is a hood you slip over your face when robbing a bank.

Poker is a game played with a deck of cards, and No-Limit Hold’em is the most popular format. It’s not to be confused with the poker sadists use during sexual intercourse, or the one non-sadists use to stoke a fire.

Currently, in parts of the world not run by lunatics, people are playing online poker for vast sums of money. Some of them are eating baklava, a few wear balaclavas, and you might even find one or two eating baklava while wearing a balaclava. I don’t want to deviate towards the sadists, because, after all, this is an article about poker.

Outside of SCOOP, and Patrick “pads1161” Leonard continued his ascent to the top of the PocketFives World Rankings after chopping the $1,050 Sunday Warm-Up on PokerStars with the Estonian Markku “markovitsus” Koplimaa. The pair waded through a 304-entrant field including Vladimir Troyanovskiy (4th) and Adrian Mateos (8th). Leonard collected $50,974 with the Estonian earning $49,068.

Leonard is going to have to take up hypnotism, and then put Niklas “Lena900” Åstedt under his spell if he’s going to take that number one spot. The Swede is simply unstoppable, and this weekend, he took down the 249-entrant $1,050 Sunday Supersonic for $48,876.