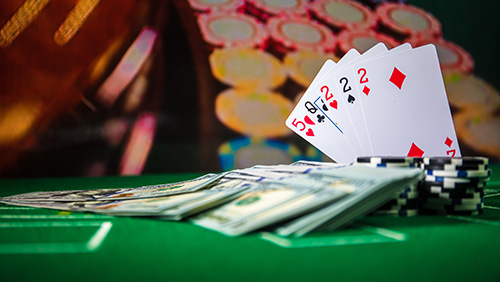 partypoker has announced plans to bring the $20m GTD Online MILLIONS in line with the live tour creating a series of yet unknown side events, and a $10k buy-in.

If online poker is bread and butter, then live tournament poker must be those cubed cheese, pineapples and silverskin onions on a stick. That’s why it was crucial that partypoker was able to get the chopping board and bread knife out when they created the most significant online prize pool in history. To prove it’s no fluke, they’re going to give it another shot.

partypoker has provided the dates of the 2019 MILLIONS Online adventure and a few other pieces of information to boot. The online poker giants will once again guarantee $20m in prize money, but the buy-in will increase to $10,300 bringing it in line with the live 2019 MILLIONS schedule.

And that’s not the only change.

In a press release, Tom Waters, Managing Director, partypoker, stated that there was a desire to transmute the full live MILLIONS experience, online, and because of that, the 2019 event will also have a series of side events supporting the $10,300 buy-in, $20m GTD Monster.

What are those side events?

Will the $20m GTD event be a freezeout?

We don’t have the answers to those questions, yet, but we will bring them to you in due course.

Last year, when the $20m GTD Online MILLIONS ran it operated as a $5,300 buy-in event, and Manuel ’Sheparentao’ Ruivo and Pim ‘ForMatherRussia’ de Goede chopped the Godzilla sized prizepool after making the heads-up phase of the 4,367-entrant field. Ruivo banked $2,329,943.88, with de Goede taking $2,309,994. In total, four players became millionaires thanks to the event.

Since partypoker broke the world record for an online multi-table tournament (MTT) prize pool, the online structures and schedules continue to improve, but this weekend two of their biggest events were missing a few Sunday souls.

It was a fantastic Sunday for ucantrybut who also finished eighth in the $2,100 buy-in, $250,000 Guaranteed Sunday Gladiator. The Gladiator attracted 111-entrants, so another overlay and Elio ‘Donzledubru’ Fox took it down for $63,481. At the beginning of April, Fox successfully defended his $50,000 No-Limit Hold’em Super High Roller title at the World Poker Tour (WPT) Seminole Hard Rock Poker Showdown proving he has the kahunas to bake gold in both live and online events. ​