Former New Jersey State Senator Raymond Lesniak will be speaking at next week’s Betting on Sports America (23-25 April) and holding a book signing session at the event. 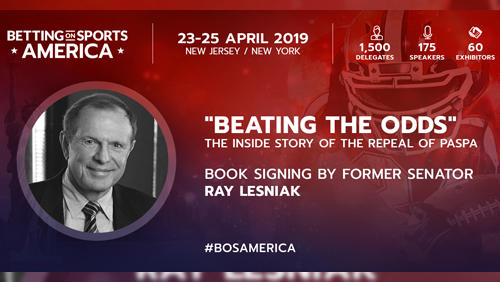 As an American Democratic Party politician who served in the New Jersey State Senate from 1983 to 2018, Lesniak helped drive the legal challenge to the Professional and Amateur Sports Protection Act (PASPA), ultimately leading to its overturn in May 2018.

As early as 2014, Lesniak had announced his plan to challenge the outdated bill – passed in 1992 – and legalize sports betting for both racetracks and casinos in the state.

On the second full day of the conference (Thursday 25 April), fittingly held in New Jersey at the Meadowlands Exposition Center, he will be joining a panel of experts for a ‘States of the Nation’ track session titled ‘New Jersey – land of opportunity’.

However, he will already be at the event from Wednesday 25 May to sign copies of his eagerly awaited book, ‘Beating the odds: The Epic Battle That Brought Legal Sports Betting Across America’, which was released on 17 March to coincide with the start of this year’s ‘March Madness’ collegiate basketball tournament.

Originally Lesniak had planned to release the book ahead of Super Bowl LIII, held in Atlanta on 3 February, but briefly held it back to add a chapter on the Department of Justice (DOJ) reconsidering its 2011 opinion that the Wire Act, a federal law banning bettors from transmitting gambling data across state lines, only applied to sports betting.

Rasmus Sojmark, Founder and CEO at SBC, said: “New Jersey was so pivotal in the development of sports betting in the US, barging the door open for others to follow. We can’t wait to provide this opportunity for everyone involved in the industry to meet the man who was so instrumental in bringing sports wagering to the state.”

The book details Lesniak’s pivotal role in challenging PASPA and in particular the successful battle he had with NJ Governor Chris Christie to support the cause and getting his sports betting resolution S2460 signed into law.

Lesniak wrote: “With sports betting legislation in place, Governor Christie had no choice but to defend it against the challenge of the Justice Department and the sports leagues. He hired Supreme Court Superstar Lawyer Ted Olson to represent the state the rest of the way. We had finally won the tug-of-war for Governor Christie’s support. It took awhile, huge approval from New Jersey voters, and a threat to override a veto, but Governor Christie eventually came around and helped carry the ball across the finish line.”

Tickets are selling out fast for the Betting on Sports America event, to avoid disappointment anyone interested is encouraged to register HERE.