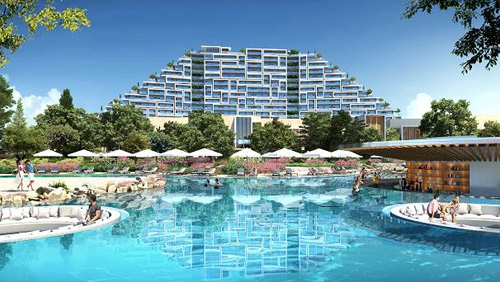 Melco International’s next big resort is going to be built on the Mediterranean island nation of Cyprus and the company is anxious to get things going. It has now chosen the main contractors for the City of Dreams Mediterranean (CODM), which will reportedly break ground on the project this month.

In a press release from this past Tuesday, Melco stated that the contractors will be Avax – Terna JV, a joint venture project that is owned by Avax SA and Terna SA. The former owns 60%, while the latter owns 40%. Melco added that the construction should “begin in early April 2019 and is scheduled to be completed within 2021.”

Lawrence Ho, Melco’s chairman, adds in the release, “I am confident given the experience and success of both parties to the joint venture, that Avax – Terna will deliver the project to the highest construction standards and will enable us to bring an extraordinary integrated casino resort to Cyprus.”

CODM is going to be a massive resort sitting on real estate that spans 91.4 acres near Limassol. The property reportedly will cost around $617 million to build and, when it’s done, will offer more than 1,000 slot machines and 100 gaming tables, a 16-story “pyramid-style” hotel tower with 500 rooms and a number of amenities. The venue is expected to create around 4,000 construction jobs and 2,400 permanent positions once it’s open.

Following the second operational year, Melco predicts the facility will generate over $750 million annually for the Cypriot economy. This would be around 4% of annual gross domestic product of the nation, but there has been no indication whether or not these are general figures, or if Melco has used them when discussing the project with local officials.

A consortium, of which Melco is a part, was given a 30-year casino license by the Cyprus government in July 2017. That consortium, Integrated Casino Resorts Cyprus Ltd., has plans to build up to four satellite casinos on the island, as well as one main venue. Two satellites—one in Nicosia and the other at the Lamaca International Airport—have already been open and the other two, in Paphos and Ayia Napa, should launch before the end of this year.