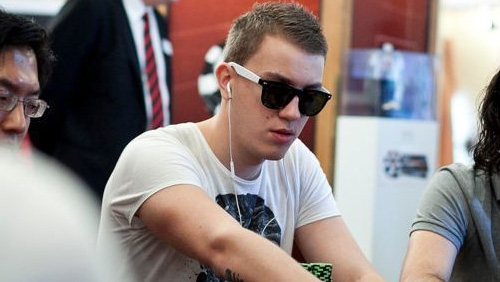 Roman “Romeopro” Romanovsky, has ended Niklas “leno9000” Åstedt’s 10-month reign at the top of the PocketFives Leaderboard after an impressive start to the year.

Many moons ago, Philipp Gruissem was ready to walk away from poker. Frazzled by the spotlight, the happiness that money provides having plateaued, the German star sought sanctity in the shade.

Then he met some extraordinary people.

They called themselves ‘Effective Altruists’, and when they learned how much money Gruissem could earn playing poker and that he was considering retiring to run away to some remote part of the world so he could make a difference, they nearly wet their pants.

The Ukrainian is to online multi-table tournaments (MTT) what Hulk Hogan was to World Wrestling Entertainment (WWE). Romanovsky wins with a consistency that makes you wonder if his opponents have been told to stay down once the big leg drops. Despite his immortality in online poker’s ranks, Romanovsky had never gravitated to the PocketFives World #1 spot until now.

A run at the top spot seemed as unlikely as Charlie Sheen developing impotence as Romanovsky took timeout throughout October & November, resurfacing to play for a week around the time Santa’s elves are hitting the coke under the pressure of not understanding how to wrap a snorkel.

In January, Romanovsky exploded to life, taking the monthly PLB title after picking up 13 five-figure scores to finish the month in #4. February was another bruiser, with Romanovsky winning his first six-figure monster of the year after finishing third in the partypoker $1m GTD Big Game for $105,500.

March was equally as epic.

It’s a brutal time for Romanovsky to turn into the model online grinder as it relegated Niklas ‘lena9000’ Åstedt to second place a week after he looked likely to break the late, great, Chad “M9kingmoves” Batista’s record of 45-weeks as the End Boss set in 2007-08.

Åstedt didn’t give up his #1 spot without a fight.

Here is the Top of the Pops.

How long Romanovsky remains at #1 depends on Romanovsky. As Jeff Walsh alludes to in his piece on this matter over at PocketFives, the Ukrainian leads a balanced life, and ‘balance’ isn’t a trait that’s going to keep you on the #1 spot for too long. In comparison, Åstedt has been in the #1 spot, eight times.

There’s also the question of how long we will see Romanovsky competing at this level. During an interview with PokerNews in Jan 2018, the Ukranian star declared his intention to leave the game with 2019 or 2020 his likely retirement dates.

The Davy 26: 26 Customer Questions That Will Improve Your Bankroll
Lee Davy
20 February 2015