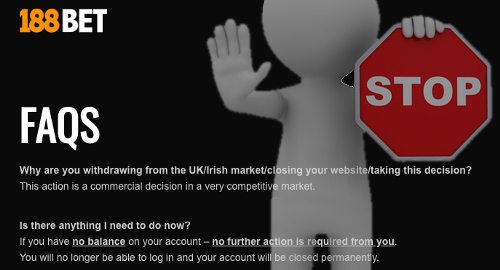 Online gambling operator 188Bet has abruptly announced the cessation of its activities in the UK, Ireland, Gibraltar and the Channel Islands.

On Tuesday morning, visitors to the 188Bet.co.uk website were greeted with a notice informing them of the operator’s decision to exit the UK/Irish markets. Customers were assured that 188Bet’s UK parent company Annatar Ltd was in no financial difficulty and that they would have until August 30 to withdraw any remaining funds in their 188Bet accounts.

The notice didn’t offer much in the way of explanation behind its decision to curtail UK-facing operations, saying only that “this action is a commercial decision in a very competitive market.” The closure “relates to 188Bet.co.uk only” and doesn’t affect other 188Bet-branded websites.

188Bet is primarily an Asian-facing operation and its pursuit of a UK Gambling Commission (UKGC) license was widely viewed as a way for it to access sponsorship opportunities in UK football, which is wildly popular among Asian sports bettors.

The abandonment of its UK operations means 188Bet will no longer be able to sponsor UK football, as such privileges are reserved for companies licensed to operate by the UKGC. 188Bet was also an Authorized Betting Partner of UK racing prior to the sector’s new funding deal with the gambling sector, and had further sponsorship ties with local cricket, snooker and rugby league outfits.

188Bet is the second UK-licensed operator to abruptly shut down this month, following the acquisition of BetBright by UK-licensed 888 Holdings. In BetBright’s case, the site voided all pending wagers, although 888 eventually agreed to honor bets placed on this month’s Cheltenham Festival.

The UKGC pleaded helplessness in forcing BetBright or 888 to honor pending wagers, while celebrating the fact that no customers lost their account balances. On Tuesday, the UKGC said it was “making enquiries with 188Bet into this matter,” but didn’t offer any indication that further action was warranted or possible.