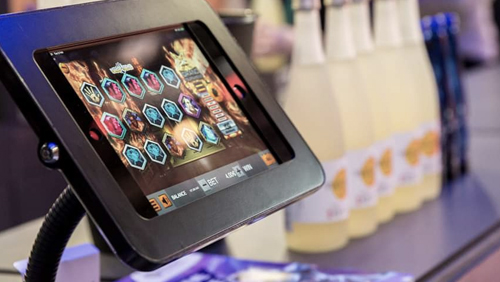 ICE Totally Gaming 2019 saw another year of exciting developments in the iGaming space, with Japanese-themed content provider, Ganapati, stealing the show when it came to slots.

The innovative, international supplier went louder than ever this year with its impressive new releases for 2019 – flagship game New Tokyo, Onmyoji and Samurai Girl, amongst well-loved favourites such as Ukiyo-E and Wild Sumo.

Neo Tokyo was the game which attracted most attention from attendees. Based on an immersive backstory about a fated cyberpunk love story and featuring striking anime-style graphics, the game is a real highlight of the Ganapati portfolio. The slot boasts 12,348 ways to win and expanding reels in the bonus round, as well as numerous other unique features.

Ganapati’s games weren’t the only thing making an impact at ICE. Designed around the Neo Tokyo concept, the Ganapati stand was as eye-catching as the games it was showcasing, with a futuristic cyberpunk style, neon lights and a dedicated stage for performances.

The stand put on quite a show, with performances from famous Japanese kabuki actors, whose characters have been captured in animation and feature as symbols in the Neo Tokyo game. In a sea of slot companies following a similar formula, Ganapati brought something new and exciting to the event, evident by the large crowds which gathered for each performance.

Kabuki is a classical form of Japanese theatre consisting of music, dancing and mime, which features actors wearing extravagant costumes and make-up. The two kabuki actors performing at ICE put on a spectacular rendition of the iconic “Renjishi” Lion Dance, in which they vigorously shake their long mane-like wigs from side to side in synchronised movements.

If this wasn’t enough to grab people’s attention, in between kabuki performances the stage made way for mochi-pounding – the routine of hammering rice into a sticky paste, before adding a variety of flavourings and serving in individual portions.

The company launched its games in April last year, making this year’s ICE a milestone event as the first with its games already live with several big platforms. Ganapati’s games will be on display at other important industry events throughout the year, including G2E Asia, PAGE and SiGMA.

Ganapati also served its trademark sake at the stand’s bar area behind the stage, which not only showed off the games but allowed for discussions about the company’s G8C blockchain project. Launching late last year, G8C is set to take off this year as it is presented on a world tour of the most widely-attended blockchain events of 2019.

2019 is sure to see significant growth on both sides of the Ganapati business.