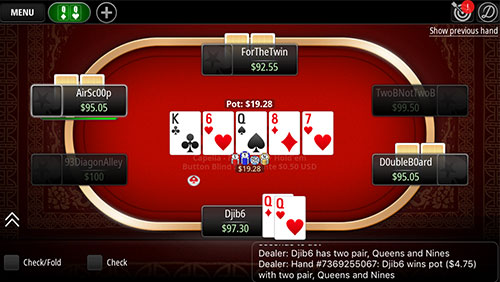 PokerStars joins the Short-Deck revolution with the release of an online version called 6+ Hold’em, and Roman “RomeOpro” Romanovsky takes down the $2,100 buy-in Sunday High Roller during the PokerStars High Roller Club.

People living with Epilepsy don’t want to take a walk down the aisle that leads to the PokerStars Caribbean Adventure (PCA) tournament area in the Atlantis Resort, Bahamas. Giant electronic displays flank you either side blitzing your brain with all manner of digital artistry, including, amongst the noise, an advert for 6+ Hold’em.

Pokerfuse told the world to expect 6+ Hold’em to make its debut on January 16th. They were a day off. A press release landed in my inbox January 15th to say the game was active in the real money lobbies of .DK, .EE and .NET with .COM, .EU, .UK and .SE joining a day later.

The game arrives in the wake of PokerStars removing Fusion from the lobby a mere 64-days after it debuted, par for the course for Stars when it comes to the testing of innovative new games on the client.

On this one, Chris Straghalis, Director of Poker Product at PokerStars, said he is looking forward to seeing what people think about the game that plays with a 36-card deck, minus all cards below the rank of 6.

The game first appeared in the high stakes live cash games in Macau and hit the mainstream after Tom Dwan, and Phil Ivey appeared in a series of videos talking about the game on PaulPhuaPoker.com.

On the same day that PokerStars announced plans to launch 6+ Hold’em, the World Series of Poker (WSOP) also announced plans to host a four-day $10,000 Short-Deck No-Limit Hold’em Championship during the summer. Unlike Fusion, Unfold Hold’em, Showtime Hold’em, and Split Hold’em, 6+ Holdem looks like it may be here to stay.

The game plays similarly to No-Limit Hold’em with a few exceptions. There is no small and big blind, and instead, everyone posts an ante, with the player on the button posting a double ante. The game plays six-max, and the hand rankings differ slightly with a flush beating a full-house. The ace plays as high and low, so A6789 is a straight with the ace acting like a five.

If you would like to learn more about the game then either trial the game at the Play Money tables or head to the PokerStars School for a quick tutorial. Another way of getting cute with the game is to follow your favourite PokerStars Twitch streamers as they plan to showcase the game in the coming weeks.

Here is a link to the PokerStars School.

The event attracted 79-entrants and $158,000 in prize money with Romanovsky banking $38,381 for the win. The Ukrainian, who is currently ranked #8 in the PocketFives World Rankings has earned close to $11m playing online multi-table tournaments (MTTs) with $5.8m earned on PokerStars.