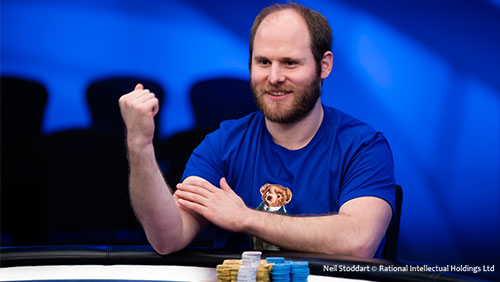 Another report from the PokerStars Caribbean Adventure at the Bahamas and Sam Greenwood has won the first of two $100,000 No-Limit Hold’em events, banking $1.7m in the process.

When it comes to walnuts, Sam Greenwood’s is bigger and more impressive than most.

The Canadian has just taken down the first of two $100,000 No-Limit Hold’em events, and with Greenwood running this hot, and playing this well, don’t be surprised to see him make another deep run in Act II.

The event attracted 61-entrants (43-unique, 18-re-entries), and PokerNews used the word demolished to describe Greenwood’s performance on a final day where he eliminated four of his last five opponents.

The final five was an interesting bunch.

Talal Shakerchi finished eighth in the $25,000 PokerStars Player’s No-Limit Hold’em Championship after his pocket aces fell to the AQs of Julien Martini. A bad beat like that would have crippled lesser men, but the Meditor Capital CEO walked straight over to the $100k, took a seat, and made another final table.

Shakerchi’s run ended in fifth place when he moved all-in holding J9 after Greenwood had opened with pocket queens. The Canadian made the call, and Shakerchi was out, pocketing a million dollars from the Atlantis tables thus far.

Chris Hunichen must have arrived at the Bahamas in confident mood after finishing third in the $100k event at the World Poker Tour (WPT) Five Diamond World Poker Classic for $592,000. Big Huni’s run in this one ended in fourth place after he ran A6 into AJ in a blind-on-blind battle with Henrik Hecklen.

The surprising face at the final table was Jesús Cortes. The Spaniard finished runner-up to Kent Lundmark in the 2010 EPT Barcelona Main Event; so the lad can play, but we have never seen him raise his head above this kind of parapet before. Cortes handled himself well, finishing third for a career-high score of $828,560 after Greenwood coolered him flopping the nuts on KQ9, with Cortes holding a set of queens.

The heads-up action was more of a blemish than a battle. Henrik Hecklen won the €10,300 No-Limit Hold’em event at EPT Prague back in December, and he maintained that good form finishing runner-up in this one for his most significant live tournament score to date.

PokerNews only recorded one hand, and that was when the pair got it in with Greenwood’s pocket sevens beating the A6 of the Dane to take the title, headlines and $1.77m first prize.

“I think most players if they had my cards today, would have won,” Greenwood told PokerNews after his win.