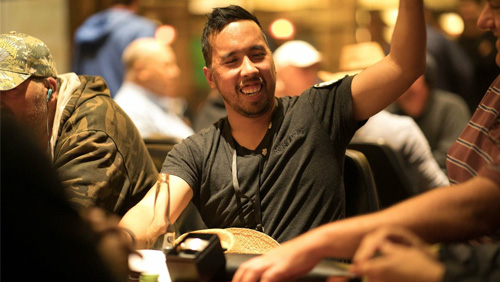 On December 11, Poker Central announced a new partnership with the RunGood Poker Series (RGPS) giving RGPS players the opportunity to appear in a special episode of Poker After Dark broadcast on PokerGO.

Preliminary event winners and Main Event final tablists earn a ticket into a freeroll satellite held at the Hard Rock in Tulsa with two $5,000 Sit n Go seats up for grabs.

Speaking at the time of the deal, RGPS president, Tana Karn, said that as a kid he would always dream of competing in front of thousands of people.

I wanted to know how this dreamer turned an idea for a poker apparel company into one of the most popular niche poker circuits in North America.

So I fired him a few questions.

Grab a slice of Christmas cake, and pause The Polar Express.

When you created RunGoodGear who was it for?

When the clothing brand launched in 2012, it didn’t have a target, just a shot in the dark. Over time the players are the ones who shaped it. I may have been the spark, but it was the players that fanned the flames. The clothes and company took form after I better understood what the community wanted. What I learned was based on the idea that; there are some great clothing brands out there with comfortable clothes and styles, but none had origin stories from poker. So I looked at what Hurley had done and their beginnings from surfing and DC’s origin story with skateboarding and snowboarding to create something for poker.

What was the worldview of the audience you were trying to tap into back then?

The beauty of poker is that it brings all different types of worldviews to one table, I looked more into trying to tap the concept that in poker it doesn’t matter what your story was outside of the table just a group of people enjoying a competitive game.

What were the conversations going on behind the scenes that led to the creation of the tour?

The tour had a simple beginning as well, just a random phone call one day from a poker room manager at Downstream Casino asking if we wanted to headline a series. We had gained momentum selling merchandise since year one, and our online following was blossoming. “If you build it, they will come” kind of epiphany. The event was a huge success, and we picked up more locations from referrals and recommendations.

What story do you tell and tell well behind your apparel and tour?

“Started with a backpack full of shirts and here we are now.”

What change are you seeking to make in your customers?

I wouldn’t exactly say seeking but, in reference to the tour, more showing that poker can be competitive and exciting even when not playing for huge amounts of money. Money is relative. We rather focus on showing players an experience rather than focus on what is up top.

What will they tell their friends about your tour?

I hope they say something like “You should come with next time, I had a blast”. We have players bring out friends specifically for the opening event because of the social atmosphere with the ambassadors.

How do you delight your customers?

Themes, some get really into it, and some don’t. But it is what makes our tour unique, every new season there is a new theme. You then start to see some of the ones who weren’t into it get into it with a different theme.

What’s the dream behind the apparel and the tour? What’s the driving force behind all of this?

There isn’t a dream. Just an appreciation year after year of the progress we make on both sides – apparel and tour. The drive is to keep at trying to beat our personal best and enjoy the ride that comes along with it.

What weakness will get in your way if you don’t address it?

Packing, there always seems to be something we left behind and needing to get over-nighted. UPS enjoys our business frequently.

How do you know if you are successful?

Awards are nice, but the answer lies with the players. I get positive and negative feedback that help build a better season. If the negative input of the new season is different than the previous season, I feel successful. Everything else that is positive is just icing on the cake.

What resources do you need to make your business even better?

Knowledge, a lot has been gained over the past six years but definitely through some bumps and bruises. As the company grows the stakes get higher, it would be nice not to have to learn the same way.

Talk about your relationship with PokerGo, how it happened and how you anticipate it will affect your brand and customers?

PokerGo and the team they’ve built are filled with some great people. They have the same vision and drive as we do to push the poker world forward, just through different mediums. A series of texts, phone calls, and dad jokes vetted our team and their team to see a perfect fit. I anticipate the relationship to impact the brand and players positively as the partnership just adds more positives to everything.

The best way to describe how I feel about poker is through the video games I played growing up. There are many epic moments shared with just as many games over screens. But what I cherish most was all-nighters spent with friends grinding out games. The camaraderie built from button mashing or trying to stay awake for one more level. The Mountain Dews and Cheetos consumed as jokes were swapped, strategies discussed, and replays were watched. Poker to me is a game that brings people together in the same way. The beverages and snacks may be different, but the feeling is still the same.