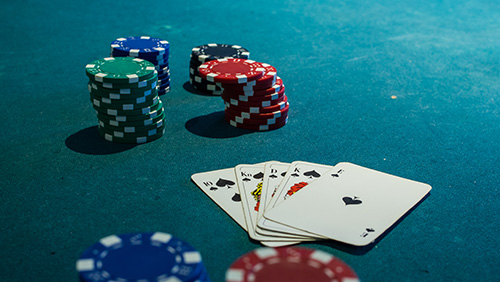 The only lights in the room come from the iconic Apple reflecting from the mirrored wardrobe hanging off the rails, and the humidifier switched to ‘Sleep Mode’ that sounds like a Boing 747.

I have stared into this screen longer than all of my lover’s eyes of the past 43-years, all two of them.

And I am feeling a little nostalgic.

I haven’t been back since Zia broke out of the egg and started to grow more substantial than the fibroids intent on stealing all of her food. I feel the pull. Maybe the 50th Anniversary would be an excellent time to return. Until then, I will think of an excuse to be there, and focus on writing about World Series of Poker (WSOPC) bracelets and World Series of Poker Circuit (WSOPC) gold rings, instead of trying to win them.

The WSOP team must be doing cartwheels thanks to the success of their WSOPC event at The Star in Sydney. The numbers that paid homage to this great institution were incredible.

White had never won a poker tournament before, preferring to play cash games. It was only his sixth-ever cash, with nothing more than $3.5k ever seeing his back pocket.

And what does he think of tournaments now he’s taken one down?

Kevin Johnson has been missing from the game for so long when the tournament organisers at the IP Hotel & Casino in Biloxi sent the results to The Hendon Mob (THM), they credited Johnson’s results to a different Kevin Johnson.

“I felt pretty good coming in into the final table,” Johnson told the WSOP after his win. “It was already the most I’ve ever won, so it was all a freeroll.”

Johnson returned to the grind after a five-year absence where he joined the real world and got a job, and this win validates that decision to some degree.

The 28-year-old Memphis man conquered a field of 382-entrants in the $1,700 buy-in Main Event IP Biloxi, and in doing so he took out a final table that housed a cracking collection of former champions and men in form.

The former WSOPC Main Event winner, Luke Graham, came into this one after having a decent year finishing 20/1663 in a $1,500 No-Limit Hold’em bracelet event at the World Series of Poker (WSOP), and a 7/372 finish in a WPTDeepStacks Main Event in Jacksonville. Matthew Higgins had won the gargantuan 2,608-entrant $365 WSOPC event in Harrah’s Cherokee in April for $101,326. Benjamin Thomas had won a gold ring in a $400 game when the WSOPC visited a year ago beating 137-entrants.

Timothy Conroy finished 3/2370 in a $600 Deepstack event at the Borgata Spring Open for $91,864. Johnny Landreth is a multiple gold ring winner. BJ McBrayer had taken down a Heartland Poker Tour (HPT) Main Event in Vicksburg for $45,946 back in August.

And then there was Johnson, the rustiest man of them all, ending up on top.

And what will he do with the money?

Players heading to the WSOP for the 50th Anniversary shindig will have to change their Total Rewards card after Caesars announced plans to change the name and coat of arms to Caesars Rewards.

Nothing changes except the name, unless you are a Platinum or Diamond member who can now earn points to stay at Caesars properties based in Las Vegas, Atlantic City or Dubai.

Caesars are asking locals to switch out the old for the new by February 1, 2019.