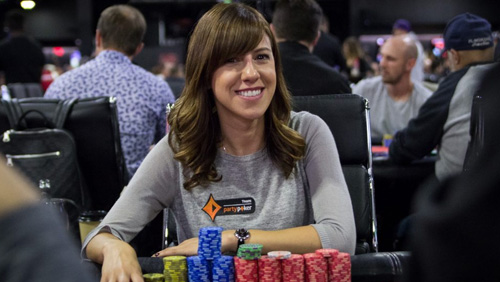 Poker pro Kristen Bicknell had an incredible Sunday this weekend. The APPT High Roller winner, who goes by “krissyb24” online, was getting busy at the virtual felt, participating in tournaments at PokerStars and partypoker. Her efforts were worth it, as she took down a Sunday Major and finished as runner-up at another event on PokerStars and picked up two $5,300 MILLIONS Online

Her best cash was at the High Roller Club: $2,100 Sunday Cooldown 8-Max Turbo PKO on PokerStars. The event saw 186 players take a virtual seat for their chance at taking home a piece of the $372,000 prize pool. The tournament attracted a number of well-known pros, including Viktor Blom, Steve O’Dwyer and Preben Stokkan. Unfortunately, none of the three would see the final table.

In the PokerStars Bigger $215 event, Bicknell was able to outlast of her 563 opponents to pocket an additional $19,882 on the day. She didn’t waste time, putting her heads-up opponent, “ULOSEMFKR!!” out with $14,428. The Estonian player might need to consider a change in moniker. I heard “ILOSEMFKR!!” is available.