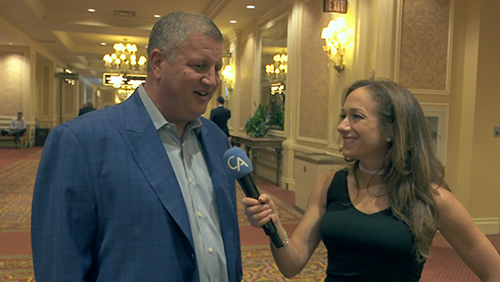 CalvinAyre.com’s Becky Liggero spoke recently with hotel and casino owner Derek Stevens, on what he expects for sports betting, specifically in Las Vegas.

While some may see the legalization of sports betting all across the U.S. as beginning of the end of Las Vegas as the capital of sports betting, Derek Stevens, owner of The D Las Vegas and the Golden Gate Casino Hotel, is looking at more growth in the industry.

“I really kind of wanted to hold back initially before really taking a position, but I could tell you right now, I feel real god about what’s going to happen in the state of Nevada and what’s going to happen in Las Vegas. I am not one that thinks that the proliferation of sports betting in other states is going to hurt Las Vegas, and the reason is because, I think now all the major networks are showing far more about sports wagering, and I think you’re going to see just an increased growth in this legal sports betting,” he said.

Whatever revenues other states make should not mean a reduced take for those in Nevada, according to Stevens. He explained, “It’s not as if New Jersey’s going to take a large portion of the action, or New Mexico is, or anything else like that. I just think the overall size of the pie is going to grow that dramatically, and the fact that Nevada stays really in the key spot because of the tax rates.”

Stevens sees a remarkable contrast between the present market and around the time he was just starting in the area. “I’ve been in downtown Las Vegas now for 12 years, and I’ve gotten to see what it looked like in the recession in ‘09 and ‘10, and now all of a sudden you’ve got this really incredible resurgence and for me it’s fun to be a part of, with two properties, with the D and the Golden Gate, and now we’re working on our third downtown, and it’s just great to see this energy level and this commitment and the capital coming in, and sports is going to be a big part of what we’re doing,” he said.

Besides all this, he’s partnered with the Vegas Stats & Information Network (VSiN). “We’re excited. We’re going to build a whole television and radio studio inside of our new property, and that will be the home of VSiN here in Las Vegas, and they’re going to have a great channel for what we consider to be is going to be a pretty game-changing sportsbook when we open it up at the new property,” Stevens said.