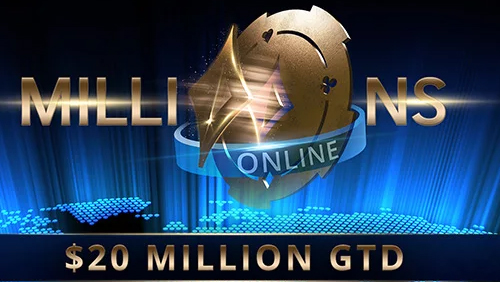 A round-up of news from partypoker including a brief update on Day 1A of the Online MILLIONS event, a great Sunday for Philipp Gruissem, Fedor Holz after a chef, Mosconi Cup news, and an appearance at the cash game tables from Michael Jordan.

Each time I cough, the guy sitting in front of me looks back. A snide, I want to stick your head in a guillotine so you stop firing your diseased phlegm into the back of my neck. Of course, none of my germs is hitting his neck; they’re all smacking the back of his head.

You don’t get this problem when you’re home.

You can eat fake meat and fart, and nobody cares.

Maybe there’s a future to this online poker thing?

It’s coming up to a year ago since partypoker announced a new global live tour called MILLIONS. They started by smashing guarantees with the same frequency that boxers crush punching bags.

The word on the street was unanimous.

partypoker was becoming the next PokerStars.

I’m not so sure the same feeling is out there.

Tom, Rob, John and the team missed the MILLIONS North America guarantee and followed that up with a few scissors short of a full barber kit in the Caribbean Poker Party (CPP).

The last thing they need right now is for the $20m GTD Online MILLIONS to turn into a blocked sink of an affair.

Day 1A gives me hope that they could get back to hitting home runs.

The prize pool was a new daily record for the online giant.


251 of those Day 1A entrants came via online satellites, and they will be hoping for more of the same throughout the week.

In other partypoker news, the team will sponsor the 2018 Mosconi Cup 4-7 December, live from Alexandra Palace in London. It’s the 25thAnniversary of the Ryder Cup of pool, and the Europeans have won the past eight meetings with the Americans. The bookies believe Team Europe will extend that record to nine, installing them as the 4/9 favourite. It’s a good gig for partypoker as Sky Sports cover the event.

partypoker Team Online has one more mouth to feed after poker player, and commentator Andrew Hedley became the latest ambassador vowing to stream his poker action live to the world for the rest of his life.

Hedley has been working alongside James Dempsey in the MILLIONS commentary booth, so Hedley is familiar with the partypoker water cooler. It’s been a good year for the man who wears a beard better than The Netherlands wears a windmill. In the summer he finished 15/1682 in the PokerStars European Poker Tour (EPT) in Barcelona for a career-high $81,815. He then came 16/3120 in The Closer at The World Series of Poker (WSOP) earning $25,446 and then came 10/3816 in the Battle of Malta for $21,647.

Here is the mob:

80% of people polled by Gallup don’t like their job. If that’s you, and you are healthy, dependable, honest and driven to succeed in the organic and whole food space, then pay attention.

Do you know when you’re travelling on a train daydreaming about being loaded and having a personal chef?

Hey! I am looking for an experienced star-quality chef with a great mindset to work within my home and with my team!
Extensive cooking experience and location Vienna required. Outlook: Running a low-key 1*-Restaurant in our space. Health & performance will be central.

Last but not least, partypoker Chairman, Mike Sexton, put pen to paper this week on a blog post you can read right here.

In it, he summed up the Caribbean Poker Party (CPP) in one word – Wow. He then used two words, to sum up, the Baha Mar poker room – Double Wow. There weren’t too many pieces of gold to be mined, but Sexton did confirm that the NBA legend Michael Jordan stopped by the high stakes poker room to have a little dabble.