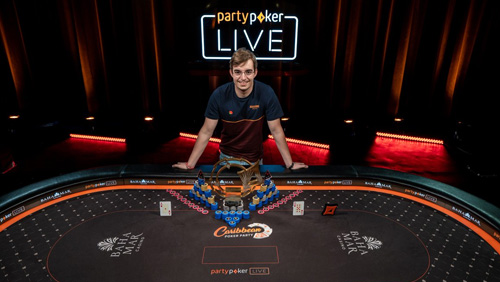 The pièce de résistance at the partypoker Caribbean Poker Party is over after Filipe Oliveira from Portugal conquered a field of 1,815 entrants to win the $1.5m first prize after beating the American Craig Mason, heads-up.

It was a decent day for Portugal, yesterday.

The national football side came away from Italy with a point, becoming the first team to reach the semi-finals of the UEFA Nations League, and Filipe Oliveira became a millionaire at the partypoker Caribbean Poker Party (CPP).

Let’s take a look at how he did it.

The move to the Baha Mar Resort in the Bahamas, coupled with a massive marketing push, worked, as 1,815 players scurried around the poker tables like ants looking for presents to take home to their queen. Compare that to the 1,061-entrants that contributed towards Sam Greenwood’s 2017 million buck prize, and you have to say the event was a success despite falling around a million bucks shy of the guarantee.

The final table, while devoid of any standout star, was still chocked full of quality. Craig Mason had made the final table of a World Series of Poker (WSOP) $1.5k No-Limit Hold’em event in 2016, finishing sixth. Marc MacDonnell had plenty of big time experience finishing fourth in the WSOP Millionaire Maker, fourth in the World Poker Tour (WPT) LAPC, and most recently conquering a field of 640-entrants in a side event at the Seminole Hard Rock Poker Open for $119,465.

Konstantin Maslek is a former WSOP bracelet winner having taking down an Omaha/Seven Card Stud Hi-Lo event back in 2015. Alexander Turyansky came tenth in the 2015 WSOP Main Event. And Diogo Veiga won a WSOP bracelet this summer and finished sixth in the partypoker MILLIONS Grand Final in Barcelona.

But the player who came into the final table with all the experience was the $6m+ man Joe Kuether.

Fortunately, for the rest of the table, Kuether started as the short stack and was the first to lose his seat when he moved all-in holding QJo in the small blind, and Mason called and conquered with A3 in the large.

Hartmann opened in early position holding QTo, before calling Turyansky’s all-in. Turyansky showed T9dd. It looked all , and Cleopatra like, but you get nothing for looking sexy in this game. Five community cards later, and Turansky was out.

Sometimes you run havoc over a table, and other times, you get through to the end by the skin of your teeth, and Filipe Oliveira took the latter route. The man from Portugal moved all-in with his last three big blinds holding K6o. Maslek called holding KJ, and Hartmann did likewise with J3.

Maslek bet Hartmann out of the pot, on a 762 flop, and two giant bricks crashed onto the table to give Oliveira an unlikely triple up with a pair of sixes.

The same run good did not stick with Oliveira’s compatriot.

Veiga moved all-in on the button holding A7dd, and Mason called in the big blind with pocket fives. An ace appeared in the window to scare the crap out of Mason, but a third five soon followed, restoring sense and sensibility. Mason sent Veiga to jail, but allowed him to pass GO, and collect $400,000 for his troubles.

Maslek began the day as the chip leader, but the former WSOP bracelet winner didn’t end the day in the same position. MacDonnell moved all-in from the button holding A8dd, and Maslek made the no-brainer from the big blind holding pocket sevens. The flop was clean. The turn was more immaculate. But the river spat an ace into the face of Maslek, and I reckon the lad is still blind this morning.

It wouldn’t be a final table of a major event without a German, and this one lost theirs in fourth when Pascal Hartmann lost a flip with KJ versus the pocket nines of Oliveira.

The man who a radio-ad ago was sitting on three big blinds, had become a significant force in this thing.

We reached heads-up when MacDonnell exited in third.

The vast majority of the Irishman’s chips went to Mason, after the American hit a flush on the turn on Ad7s4dQd4s, and MacDonnell called a tournament-defining river bet holding what PokerNews showed as JTo for jack high, and we can assume that they got that one wrong, or MacDonnell paid the price for his bravery. His final five big blinds went to Oliveira in the next orbit.

The heads-up fight began with both players even in chips.

Oliveira had only reached heads-up once before, in 2016 during a €2k side event at the PokerStars’ European Poker Tour (EPT) in Dublin, and he won that.

Mason was also making his second-ever heads-up appearance, and he lost the last one, when David Williams beat him in a 50-entrant, $80 mess about in the Orleans Hotel in Las Vegas during the summer.

This one stayed true to form.

Mason opened the action, and then called a three-bet from Oliveira. The flop came down Qd9c2s, Oliveira bet 60 million, Mason moved all-in for 299 million, and the man from Portugal called. Mason showed K9o for a pair of nines, but Oliveira had A9 for the better kicker. The turn, and river bricked for the American, and Oliveira’s hand was held aloft for only the second time in his short and sweet career.

Three other stars of the game who decided to run deep in this one rather than hang around in the launderette waiting for their knickers to dry were the former EPT Champion, Anton Wigg (10th), the recent $25k fourth-place finisher, Paul Tedeschi (12th) and the brilliant Brit, Adam Owen (15th).