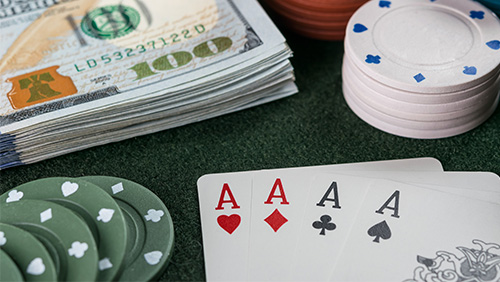 The Card Player Poker Tour (CPPT) Big Poker Oktober Main Event is now in the books. It was as successful as previous big-name poker tournaments held at The Bicycle Hotel & Casino on California, drawing 524 entries. In the end, a poker player with only $4,300 in cashes over four years emerged victorious, scoring a massive pot of $149,733.

Steve Jun hasn’t had much luck at the live tables. According to Hendon Mob, he only cashed three times in the past four years. This would be his chance to show that he had the right stuff and Jun definitely pulled it off. After being crowned the tournament champ, he stated, “I was hoping to win, but I didn’t really expect that I would. I almost didn’t play this tournament because I was tired at the time. My realistic goal coming into the final day was to just try to make the top nine, but I just ran really well. Probably a once-in-a-lifetime run.”

As players took to the tables for the final day of action yesterday, Jun was in a solid ninth spot in chips. 16 players remained and he kept his head above water as the field continued to decrease. He managed to stay alive as several poker greats fell, like Jordan Cristos, who went home in 15th place with $6,355, and Mike Eskandari, who took $7,615 with his 11th-place finish.

Down to only 10 players, things started heating up. Jun found a few lucky cards and took out Adam Geyer, who went to the rail next with $7,615. After Derek Kwan fell in ninth, Jun then eliminated Eric Jeffries after scoring pocket rockets against pocket eights. The California resident kept the pressure on, slowly building his stack and then, after a few more eliminations, all but sealed his victory when he took a huge pot against Jim Collopy. Collopy, who is a Pot-Limit Hold’em bracelet winner from the 2013 WSOP Asia Pacific games, got it all in with a set of Aces, but there was an unexpected twist—Jun also had a set of Aces and his King kicker was too much for the Queen quicker held by Collopy.

With four players remaining, Jun held a substantial chip lead, which he was all too happy to pad even more. He knocked out Said El Harrak with pocket Aces again, and El Harrak, who started the day as the second-place chip leader, fell holding suited K-Q. It was undoubtedly the luck of the draw, as El Harrak had scored two pair with a K on the turn, but an Ace on the river gave Jun the hand and an ever-increasing amount of chips. $52,080 went to El Harrak to try to lessen the sting of the suckout.

Jun now had command of the table and was protecting a chip stack that was four times greater than either of his remaining two opponents. There were whispers of a deal, but the trio decided against it and played down to a winner.

Brandon Zuidema would fall first, losing a matchup that awarded him $52,080. Jun would then face off against Duey Duong, who has been a the final table of the same tournament three out of the past five years. The two agreed to a deal, but played on for the difference. In the end, Jun found pocket Kings and Duong was staring down at A-J. A Jack on the flop gave Duong a glimmer of hope, but it wasn’t meant to be and Jun’s Kings held. Duong took home $97,000 for his second-place performance.