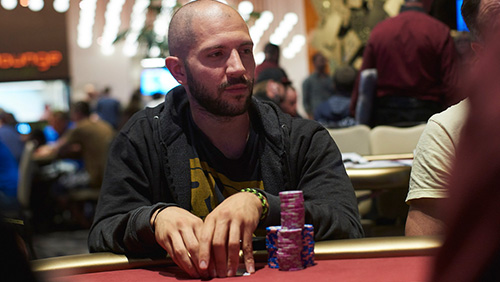 The World Series of Poker Circuit (WSOPC) will wrap up its visit to the Horseshoe Hammond in Illinois next Monday when the winner of the Main Event is crowned. Since getting underway on October 11, the series has had some monster turnouts and a number of firsts. The first-place prize of $124,385 won by Chris Fuchs in the inaugural event marked his first recorded cash win and first gold ring. The series has now recorded another first—the first time two roommates won poker tournaments on the same day.

Mo Nuwwarah, a reporter for Poker News, won his first gold ring when he took down the $600 HORSE event on Tuesday, the same day he was celebrating his birthday. Nuwwarah had to withstand three hours of heads-up action to take the title, but the $14,008 top prize certainly made it worthwhile.

After the win, Nuwwarah, who beat Barry Greenstein in heads-up play at the PokerStars Festival New Jersey $340 8-Game Championship in 2016, was quoted by Poker News saying, “It was a long battle, it was back and forth. I was down to nine bets, then he was down to five bets, then he came back. It’s limit poker; you just have to go through the swings.”

He wasn’t alone in winning that day. Nuwwarah shares an apartment in Chicago with Josh Reichard, who has nine gold rings to his credit. Reichard added another ring to his collection the same day as his roommate when he outlasted 553 players at the $400 NLHE Monster Stack event. The turnout resulted in a whopping $182,820 prize pool to be split among the finalists, and Reichard grabbed the lion’s share with $38,392. His ten rings put him in third for the player with the most WSOPC rings, behind Maurice Hawkins, who has 11 rings, and Valentin Vornicu, owner of 12.

Said Reichard after his victory, “It feels great, this was especially fun because it was a really friendly talkative final table; everybody had a good time. There was one point where my buddy [Chris] Conrad on my left got a double knockout so he was close to me in chips. I lost the chip lead for a little while but I hung in there, won some all-ins, got lucky in some pots, and it ended up working out.”

There are still a small handful of events, including the Main Event. The $1,700 tournament kicks off Friday and will run through next Monday. It offers a guarantee of $1 million and will undoubtedly attract a large crowd.