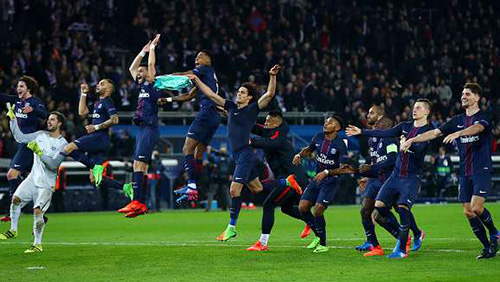 Did a team official work behind the scenes to control the outcome of a Champions League soccer match? That’s what investigators are now trying to discover after an incredibly large bet surfaced for a match held earlier this month. It’s no surprise that the wager stands out among the rest—it was reportedly worth around $5.7 million.

On October 3, Paris St. Germain (PSG) faced off against Red Star Belgrade that resulted in a tromping of the Belgrade team. PSG went on to win 6-1, which, in itself, wasn’t too surprising; however, the fact that an unidentified official with Red Star placed a €5-million bet prior to the game certainly is. Now, French police want to know the truth, according to a report by sports news outlet L’Equipe. The news outlet indicates that the official had wagered that his team would lose by five points.

UEFA’s administrative body reportedly tipped off police after it became suspicious when it discovered the bet. The police have confirmed that they were conducting an investigation, but have not provided any additional comments.

Red Star isn’t the only team being targeted for suspected match-fixing. This past Friday, Belgian prosecutors presented charges against 19 people for crimes related to the illegal activity. Those charged include two referees, several soccer agents and the coach of Club Brugge of Belgium, Ivan Leko. All are to be sentenced for either illegally profiting from match-fixing or from directly participating in rigging games.

Toward the end of last season, Belgian prosecutors voiced their concerns that two games had been fixed in the country’s second division. The prosecutors investigated and eventually accused a soccer agent, Dejan Veljkovic, of colluding with game officials and referees in an attempt to keep KV Mechelen from being relegated. Fortunately, those attempts failed.

Obviously, a bet that large couldn’t be made without attracting a serious amount of attention. However, so far, there is no evidence that any wrongdoing had taken place. For its part, Red Star is supporting the investigation and stated, “The allegations from this report can cause great damage to the reputation of our club, and therefore Red Star insists both UEFA and the competent investigating authorities in Serbia and France investigate these doubts to the end and come to the truth.”