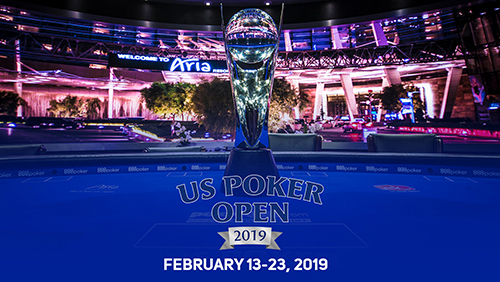 Poker Central, the home of anything poker-related worth a watch, has revealed the schedule for the 2019 US Poker Open, including a $100k cherry.

The Poker Central team is a busy bunch. There isn’t a week that goes by without a piece of write-worthy news landing in my email tray in between layers of wham; bam no thank you spam.

At the back end of 2017, Poker Central announced plans to launch The US Poker Open. The made-for-tv show differed from Poker Central’s other baby, The Poker Masters, as it scheduled alternatives to No-Limit Hold’em events such as Pot-Limit Omaha and a Mixed Games Championship. Added to the Super High Roller Bowl (SHRB) this triumvirate became known as The High Roller Triple Crown.

The Global Poker Index (GPI) World Number One, Stephen Chidwick, won the inaugural event (the results of which you can find below), and today, Poker Central announced the 2019 schedule.

As with the 2018 Poker Masters, Cary Katz and the team have made some changes.

There are ten events, not eight, and the average buy-in has increased from $25,500 to $29,000, thanks in large to a significantly bigger Main Event ($100k versus $50k). The Mixed Game Championship is deader than an egg left in a nest belonging to a bird hanging out of the mouth of a cat, and Short-Deck debuts in the US Poker Open at the $10k & $25k price points after a successful admission during the Poker Masters.

The event takes place at the PokerGO Studios, at the ARIA Resort & Casino in Las Vegas, February 13 – 23, with the action, streamed live for PokerGO subscribers.

As in 2017, the winner of the event will be the man (or woman) who earns the most money (gross) throughout the ten-games. To hook a few more players, Poker Central have agreed to give the winner an additional $100,000 in prize money.

And there’s a cup to be won.