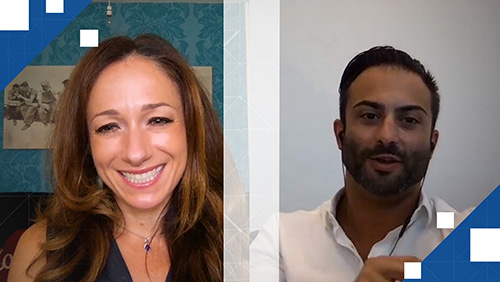 By now you’ve realized a major focus of mine is the intersection of blockchain and the online gambling industry, a sweet spot for a number of professionals who have spent years in iGaming and wish to marry blockchain tech with their legacy knowledge.

Malta-based Jan Sammut, CEO of Reftoken.io, spent 10 years working in the online gambling industry on both the operator and affiliate sides of the business before he recently made a move into the blockchain space.

“I was reading about [blockchain] quite intensely and suddenly the light bulb went off and it said, ‘there’s a real world use case for this technology especially in regards to affiliate platforms and affiliate tracking, basically making them fraud-less’”, Sammut shared.

Reftoken touts itself as the “world’s first decentralized affiliate platform”, utilizing the Ethereum blockchain to guarantee a “fraud-less” experience for both merchants and affiliates alike, a subject Sammut will be covering during AffiliateFEST 2018.

“The idea is that all the really smart parts of the Ethereum protocol, the smart contracts, decentralization, tokens, etc, every single one of them is a silver bullet for one of the pain points that we have been trying to resolve in affiliation for the last 10 years, both on the affiliate side and on the merchant side. So it really was the perfect application for this technology”, Sammut explained.

Founded in June, 2017 and now in BETA testing, the Reftoken platform allows for every single affiliate deal to be governed by a smart contract and it all kicks off after the merchant puts the funds required for the campaign in escrow.

“What will happen is this will prevent a)the merchants from holding payments from the affiliates, b)it will alleviate affiliates’ cash flow problems because there’s no more ‘30 days’, invoicing, etc. As soon as a conversion happens, they get paid for that conversion instantly, right on the blockchain”, said Sammut.

“Third, it uses the blockchain and it uses our proprietary wallet and market proofs to validate conversions on the fly. So it becomes almost impossible to run CPA fraud, it becomes almost impossible to skim or shave the commissions, so basically it just creates this nice, trustless, transparent layer where everyone can go back and audit all the transactions”, he said.

“You’ll be able to go in and actually view line by line, player by player, spin by spin if you want, where your commissions were earned, where they weren’t earned, etc, and this can only be done via smart contracts which is open source and auditable on the blockchain”, he added.

When asked what the reaction has been from affiliates and operators to Reftoken’s concept, Sammut made an interesting point- he believes resistance to a “fraud-less” platform such as his own is a red flag for shady behavior.

“Basically everyone we speak to is rather enthusiastic about it, particularly on the affiliate side, operators are more skeptical. However, I’ve worked on both sides of the industry and in all fairness, some operators are skeptical– these are the operators that basically have something to hide”, he said.

“But in reality, there is dishonesty on both sides of the equation. I’ve seen a huge amount of very well organized CPA fraud in my time, I’ve seen some very, very well executed shaving in my time from the operator side”, Sammut added.

“So overall, anyone who is looking to run a straight game and is honest and is just looking to protect themselves in order to receive what they have earned and what they have invested their funds in generating is enthusiastic about it. It’s the people that are ‘umm-ing’ and ‘ahh-ing’ are generally the ones that are worrying that their game is going to be up”, he said with a smile.

Time will tell how it all unfolds for affiliate marketing and the blockchain, especially as the technology becomes more and more mainstream. In the meantime, Reftoken has established itself as an industry leader in the blockchain affiliate platform space and they are only just getting started.

“Overall, the platform is still being developed, scheduled for launch at the end of this year, around December/January, 2018/2019. So we will be promoting it pretty heavily then. Until then, we have a couple of BETA partners that are signed up and we will be soft launching the platform with them in order to promote some crypto currency casinos, some of them are actually going into exchanges and stuff like that”, Sammut shared.