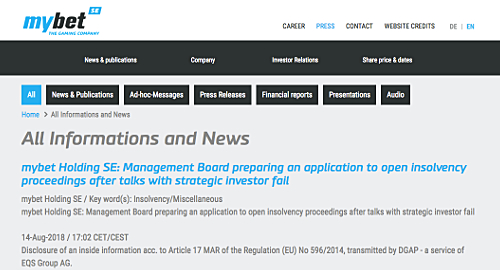 German online gambling operator Mybet has announced its intention to file for insolvency after failing to come to terms with a would-be financial savior.

On Tuesday, Mybet issued a statement indicating that its board of directors was preparing an application to open insolvency proceedings after talks with a strategic investor failed to produce an agreement. The company expects to file its application on Friday.

In July, Mybet announced that it planned to sell its customer-facing online gambling operations to an unidentified strategic investor so that the company could focus on its B2B business. Mybet said Tuesday that these talks had “closed” due to “conditions set by the investors which could not be fulfilled.”

Added pressure came after the Frankfurt am Main II Tax Office rejected Mybet’s application for provisional suspension or stay of enforcement filed by the group’s Malta-based offshoot Personal Exchange International. The rejection of this application left Mybet with €4m in sports betting taxes in arrears, an obligation that left the company facing “imminent illiquidity.”

The demise of Mybet’s latest investor discussions followed a similar announcement in June, when the company announced that it had curtailed discussions with an unidentified party due to “differences of opinion concerning the implementation of strategic and operational collaboration in the online sector.”

In April, Mybet delayed the release of its financial statements for 2017 and postponed the date of its annual general meeting. The company had previously reduced its 2017 estimates due to “delays encountered in online business in the company’s core markets, Greece and Ghana.”

The most recent Mybet financial report came last November, when the company indicated that its revenue over the first nine months of 2017 had fallen 28.2% to €24.9m. The sports betting segment fell 17% year-on-year to €17.8m while casino revenue fell by more than half to €5.4m, which the company blamed on the blocking of its Greece-facing site.

In January, Mybet temporarily lost its ability to offer customers a live casino offering after supplier Novomatic Group exited Germany’s online casino market. Mybet said in April that the economic effects of this lack of live casino product had been “very low.”