Home / Poker / Boxing champ to pursue poker career, even if he doesn’t understand the rules 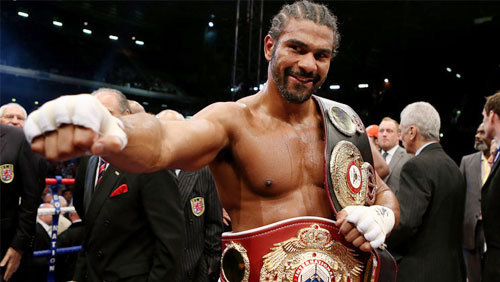 He retired from boxing this past June after earning the title of the world heavyweight, as well as the unified cruiserweight, champion. Now, David Haye says he wants to take up poker with the goal of winning a major tournament, even though he admits he knows virtually nothing about the game.

In his quest for fame and glory at the felt, Haye has already found his coaching staff. He will be trained by three of the top players in the UK, Joe Beevers, Katie Swift and Jeff Kimber. Haye will undergo a 12-month training, coached by actors, psychologists and mathematicians, until he can “forge his own style.”

Haye said that he plans on entering—and winning—the 2019 Goliath poker tournament at the Ricoh Arena in Coventry, and that he is dedicating the long list of resources to ensure that he isn’t “embarrassed” at the event. He told Talk Sport, “I come from the boxing realm and will be going into the poker realm. It’s about accepting the fact that I’ll be pretty poor, that every single person I’m playing with is better than I am.

“In sport if you’re sometimes bigger and stronger than other people, that’s enough to get you by. But I can’t use my physicality to fast track me. It’s not about how quick I am or my reflexes. It’s about learning the bread and butter of poker correctly from the very beginning.

“My biggest challenge is facing that, opening my arms and saying ‘help me, give me as much knowledge as you can’. I can’t rush. Right now I don’t know the rules of poker and that means I can learn the foundations from the best and move forward quickly. I’m such a novice so I have to focus on the fundamentals. I don’t want to embarrass myself in a year’s time. That’s not why I’m here. I want to sit down with confidence and will enter the tournament to win.”

While many may think that Haye doesn’t stand a chance at the big game, the 37-year-old has overcome odds before and has already shown his ability to be a strong sportsman. It’s going to be an interesting tournament and his participation is sure to attract a lot of attention. The tournament will be held at about this same time next year, so we’ll check back in on him then.