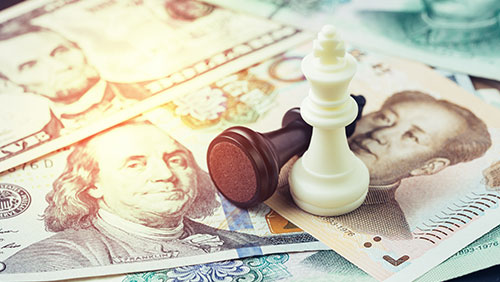 A planned casino project for Las Vegas could be postponed due to the ongoing strain between the United States and China over trade issues. Resorts World Las Vegas, which is planned by Genting Americas, Inc., is one of two that are potentially going to be delayed over the trade war, the other being The Drew.

In a report published by Brian McGill of Telsey Advisory Group, LLC, the analyst said of the possible delays of both projects, “The most likely new openings to be delayed would be… Resorts World Las Vegas and The Drew…However, both properties recently came out and said they expected openings in 2020.”

Genting Americas is a subsidiary of the Genting Bhd out of Malaysia. It first announced the planned casino in October 2017, describing it as a “multibillion-dollar resort.” No exact dollar figures were released, but analysts have previously said that the project would cost around $4 billion. Genting has billed the resort as an upscale destination for East Asian and Chinese gamblers.

Because of the ongoing trade war between the U.S. and China, business prospects for U.S.-based Macau casino investors have diminished. Many analysts have said that there is also the possibility that Chinese tourism to the U.S. could be impacted.

In addition to the trade war, the prospects of Resorts World Las Vegas were weakened due to slot machines. McGill explained in his assessment that there could be a reduced demand for the machines in North America between 2019 and 2020, stating, “As a rule of thumb, it is expected that slots will ship into [a] property 60 to 90 days ahead of the opening. This is when the manufacturers will recognise the sale typically.”

McGill added that there will more than likely be around 43,093 slot machines introduced to the casino market in North America over the course of the next three years destined for new operations and for expansions at existing casinos. He specified that this estimate was greater than what the majority of the investment community anticipates, and could be especially beneficial for Scientific Games Corp., a major supplier of casino equipment.