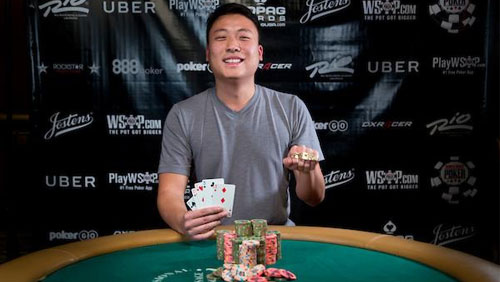 Another round-up from the World Series of Poker focusing on a courageous defence of his title by Chris Vitch, another astounding run by Scott Bohlman and a man from Arizona picking up his first bracelet.

What does a pilot do when the propeller stops turning?

What does the candle do without any flame?

What does the disco do when you fill the floor with the deaf?

The $10,000 Seven-Card Stud Hi-Lo 8-or-Better Championship has been sprinkled with oil, fried, cut up into three bite-sized chunks, and gobbled down by a hungry hoard preparing to say goodbye to their high buy-in mixed games.

As you may have guessed, this was the final mixed game championship of the summer. Some will be disheartened. Others will be glad for the bank balance to stop bleeding.

At the end of much early sparring, well-timed gut punches, and clips around the ear, the defending champion, Chris Vitch, took command after ten hours of play, and the odd minute here and there to empty bowels.

Last year, Vitch defeated 125 entrants to send the top prize of $320,103 spinning towards his bank account, and like a layabout holds onto his unemployment benefit, Vitch was not giving this one up without someone throwing a blackboard duster square in his nose.

133 began, 63 finished, 23 of which were bracelet owners, and late registration remained open until the beginning of Day 2.

Eight players skipped Day 1, deciding to hop into the harem on Day 2. Amongst these was Dan Matsuzuki, who would later tell PokerNews that he made this strategic decision because he knew everyone had an edge on him.

Let everyone kill each other while you watch from the sidelines.

With those eight additions, the field grew to 141. Ten levels later, and there were only 15-left. Vitch was still in the lead. The only man to bag a million plus chips was hoping to follow in the footsteps of Allen Cunningham, Matt Matros and Loren Klein winning three bracelets in successive years in the Moneymaker era.

14 players were trying to stop that from happening, five of them were former bracelet winners, with seven of the things hidden in boxes somewhere in their four walls. Amongst those that didn’t have a bracelet was Matsuzuki, the man who decided to avoid facing the Day 1 field.

15 condensed to a final table of eight as quickly as a fox turns to bones and innards in the midst of a pack of hounds.

The throne no longer felt the warm bum of Vitch.

The crown was on the head of Scott Bohlman, a man in form, having cashed ten times, sat at three final tables, including winning the $2,500 Mixed Big Bet and finishing sixth in the $10,000 Pot-Limit Omaha Championship.

Bohlman was the only man with over two million chips.

And then you had the dark horses.

Bracelet winner, Ken Aldridge, began the final table with nothing but a bag of nuts, but he did have the support of everyone’s favourite actor come poker player, James Woods, on the rail. And there was Matsuzuki, the man none of us had heard of sitting behind a stack seven times smaller than Bohlman.

The first player to smash headfirst into the rail was Joseph Mitchell. The man pushing him was Vitch. Then Matsuzuki rose to prominence after eliminating Bryce Yockey, all-in pre-flop, with Matsuzuki’s rolled up queens doing the damage.

Then we lost Jerry Wong, and once again it was Vitch wielding the axe in the shape of two pairs. And in a battle of the shorties, Aldridge eliminated Daham Wang in fifth, to give him one last gulp of air as the blinds began suffocating him.

Vitch still had the lead with four left in the competition, before Matsuzuki took over. Once that happened, Vitch dropped through the chip counts like a Connect-4 yellow plastic piece. Aldridge drove the dagger into his heart winning a big hand with two-pairs, and then Matsuzuki grabbed the hilt and leaned on it until Vitch’s valiant defence ended in fourth.

The three of them had quite the battle.

Bohlman dropped low, and then took the lead.

Matsuzuki had the lead and then dropped low.

And then Bohlman ousted Aldridge in third place to make sure the heads-up encounter with Matsuzuki wouldn’t be a complete whitewash, trailing 2.8m to 4.2m.

The pair went at it.

Sluggers, the both of them.

Matsuzuki opened up a big lead.

Bohlman fought back to do likewise.

And then Matsuzuki regained control, pressed hard on the pedal, dropped some James Bond Aston Martin like bombs and watched in the rearview mirror as they blew Bohlman to bits.

It was only Matsuzuki’s sixth ITM cash of his career, all at the WSOP, with a $9k cash in a 2015 $1,500 Ten Game Mix tournament his most significant score before this.