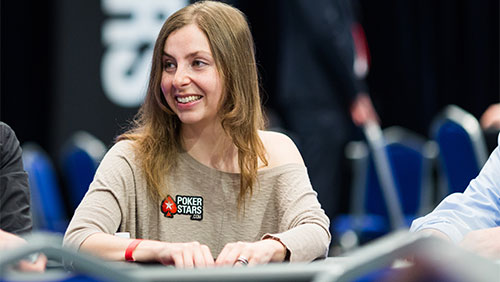 One miserable looking stripper is covered in lettuce and cucumber, the direct result of a failed Kim Basinger fridge experiment, and the other is angrily fishing herself out of the pool.

As the pair stomped out of the door, a high heel underneath each arm, the talk turned to poker.

“Give me a year, and I can turn anyone into a professional poker player,” said one of the players chomping on a piece of cucumber.

“Well, they would need to be intelligent, and most of all, hard-working, but give me someone with those two attributes, and yes, I can turn them into a professional.”

You don’t become a two-time New York Times Bestseller without having the paperclips to get on the phone and persuade people who don’t want to talk – to talk.

And as it so happens, New York contains one of the greatest poker players of all time, and he is a man who doesn’t like to talk. Konnikova contacted Erik Seidel, the pair met for coffee and a dusty doughnut, Konnikova told Seidel her plan, and he agreed to coach her. Then, Seidel introduced her to the 34-year-old to Phil Galfond, and he decided to help her.

None of the people I was sharing my WSOP household with was of the ilk of those to titans.

In January 2018, Konnikova won a $1,650 buy-in No-Limit Hold’em National at the PokerStars Caribbean Adventure (PCA) for $84,600, thus banking a $30,000 Platinum Pass for the $25,000 buy-in PokerStars Player’s No-Limit Hold’em Championship. Sniffing an opportunity to push the brand into the mainstream, PokerStars snapped her up as an ‘unofficial’ ambassador.

The Biggest Bluff was already a best-seller, and she hadn’t even written a page.

PokerStars and Konnikova have taken their relationship to the next level. The word ‘unofficial’ has been replaced by ‘PokerStars Ambassador’ – now doesn’t that have a better ring to it.

The press release emphasised Konnikova’s “Meteoric rise from rookie to poker pro in 14-months,” but I’m not buying that. While she is a healthy addition to the team (in the same ilk as Jennifer Shahade); given her background, intelligence, a hard-working ethic and access to the best players in the world, she was more likely to be a ‘hit’ than a ‘miss.’

“I like things that challenge me,” Konnikova told PokerStars. “I like a strategic, intellectual and emotional challenge and poker challenges me in all of these ways.”

Konnikova has her feet firmly on the ground.

It takes a broad skill-set to be able to write two New York Times Bestsellers and to convince Erik Seidel to coach you. But she is aware of the role that luck has also played along the way.

“I am on the right path.” Says Konnikova.

The path is yellow, and I hope by the time she reaches the end of it (the PokerStars Player’s No-Limit Hold’em Championship), she gets to meet the wise old wizard (Erik Seidel) in what would be the perfect last chapter for her new book.