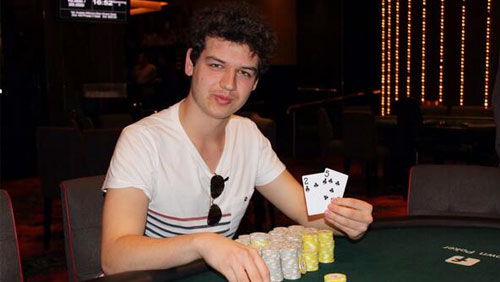 Another review from the World Series of Poker, this time focusing on a stacked final table in the Marathon, and the second bracelet for good old Britannia in the Seven Card Stud Hi-Lo 8-or-Better.

Australia frightens the crap out of me if I am honest. I can’t get past the insects that can kill you while taking a dump. And then you have all the silly laws.

It’s illegal to wear pink hot pants after midday on a Sunday.

You can’t possess more than 50kgs of spuds.

I don’t know if Michael Addamo has pink hot pants in his draw, or a cache of spuds in his garden shed, but I do know he emigrated to Thailand last year after the Australian government banned online poker.

I think the move has done him a world of good.

Addamo is a man of stamina.

So he wasn’t a bad bet to run deep in the event that stretched over five days, promising 100-minute levels and attracting 1,637 runners. But when you reach the final table; look around, and see the likes of Taylor Paur, Cate Hall and Martin Jacobson, knees wobble.

Michael Addamo is the Marathon Man.

The $2,620 outlay has produced a return on investment worth $653,581, easily the most significant score of Addamo’s career. After outlasting those titans as mentioned above, Addamo ended up facing the least experienced player, heads-up, for the bracelet.

Taylor Paur is a World Poker Tour (WPT) Champions Club member, and WSOP bracelet winner. Cate Hall is a multiple WPT Main Event Final Table combatant. Ihar Soika is a former European Poker Tour (EPT) Main Event winner. And Martin Jacobson is a former World Champ. But it was the name of Mark Sleet, and his six ITM scores, that produced the sternest test for Addamo.

Addamo began heads-up with a 25.7m v 17.2m lead, and he never relinquished it during an event heads-up contest that ended in your typical coin flip – Addamo’s AK spiking an ace to beat Sleet’s pocket sevens in the final race.

The win was Addamo’s sixth career title, and he has now earned more than $2m playing live tournaments.

It was also a great day for charity.

Cate Hall and Martin Jacobson are Raising for Effective Giving (REG) ambassadors and would have donated a chunk of their change to effective charities.

The Brits have their second bracelet of the summer.

Ben Dobson follows Philip Long into the 2018 WSOP record books with a victory in Event #25: $1,500 Seven Card Stud Hi-Lo 8-or-Better. Dobson loves a game of Stud but finds it difficult to get a game back home where he seems to spend a lot of time competing on the Dusk till Dawn (DTD) felts.

That was the advice Dobson gave out after overcoming a final table that included the two-time bracelet winner Jesse Martin, and last year’s fourth-place finisher in this event, Timothy Finne.

The victory is Dobson’s tenth of his career, and his most significant to date, topping the $124,128 earned for winning the DTD 1000 event in 2017. Dobson’s lifetime live tournament earnings roll in at a million bucks.