Poker Central has inked a deal with Amazon’s video streaming service Twitch in a bid to turn members of the avid gaming community into PokerGO subscribers during the World Series of Poker.

Over 300 million people watched the UEFA Champions League Final last night. I didn’t. You’re more likely to find a trembling surgeon than a live sporting event worth watching live on TV, for free. Fortunately, it’s not the same for poker fans.

When it comes to content, the poker community has been lucky for way too long. Ever since I joined the industry in 2009, most content has been available for free, especially once the live stream revolution kicked in. The cost of running a live tour increased as organisations felt compelled to hire production teams to stream footage around the world, and to date, most of them haven’t found new streams of income to relieve the pressure of this burden.

But some of them have.

In May 2017, in a groundbreaking deal, Poker Central, ESPN and the World Series of Poker (WSOP) agreed on terms to make public more WSOP footage than ever before, including live coverage of the entire WSOP Main Event. Poker Central would showcase their piece of the WSOP pie on PokerGO, a subscription video on demand service (SVOD).

At the time I was thinking, “Great, another monthly bill to add to the rest.”

Last week, Poker Central announced another feast of poker exclusive to PokerGO with Ali Nejad, Lon McEachern and Norman Chad calling the cards during more expansive coverage of the WSOP.

Why give your content away for free when you’ve invested so heavily in your SVOD service? 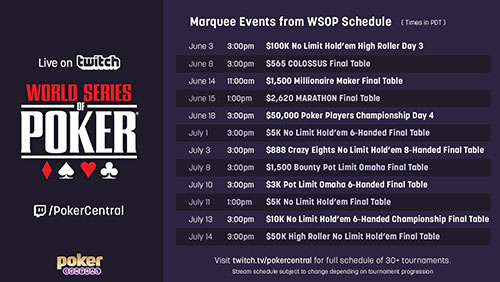 It feels like the Poker Central team have been reading the Marketing Manual 101, introducing some useful concepts, and some not so.

The decision to limit capacity on the Super High Roller Bowl (SHRB) feels like the marketing scarcity model outlined in fantastic books like Oversubscribed by Daniel Priestley, but I don’t think Poker Central is using the philosophy wisely applying it to such a prestigious event.

By offering the poker community free WSOP coverage on Twitch, it acts as a marketing vehicle for PokerGO, from a physical ad sense, and an emotional connection sense.

Poker Central isn’t dumping all the rubbish that nobody wants to watch on Twitch. Some of the final tables are excellent value. But let’s not kid ourselves here, if you’re going to watch the very best action you need to be a PokerGO subscriber.

It seems that Poker Central is hoping to build up your interest in an event through free coverage at Twitch, before emotionally forcing you to pay for a subscription, so you feel satiated.

Looking down the Twitch live stream schedule I can see countless events available for free, but you have to watch the final on PokerGO. It’s the equivalent of every episode of Game of Thrones for free, and then having to pay to watch the last episode. You would do it, but it would feel like you’ve eaten a bowl of rotten snails.

The action hits Twitch on June 2 at 15:00 (PT) with the final table of a $1,500 Omaha Hi-Lo 8-or-Better event. David Tuchmann and Jeff Platt will lead the commentary with various poker personalities filling in the colour when they’re not bracelet hunting.

Sam Simmons, VP of Content at Poker Central, says their goal is to reach as ‘large an audience as possible’ and this certainly achieves that goal.

Here’s the link for the Twitch lineup.